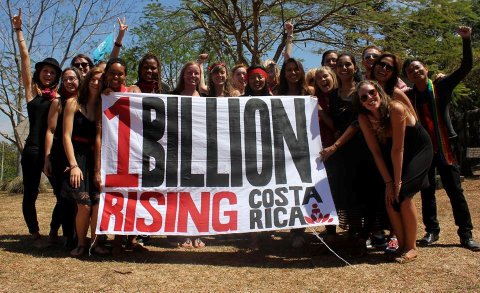 15 February 2014. University for Peace - One billion people in 207 countries joined together and danced to publicly demand an end to violence against women and girls through the campaign One Billion Rising for Justicestarted years ago by playwright Eve Ensler (The Vagina Monologues) in response to the gang-rape of Jyoti Singh in Delhi, India.

As part of the Campaign this year, more than 30 current UPEACE students and their allies showed their solidarity by participating in flash mobs in UPEACE campus in El Rodeo de Mora and in San José.

Through a series of coordinated “flash mobs,” women survivors of violence and their supporters fill parks, schools, government buildings and other public spaces where women deserve to feel safe.  Through song and dance, they call for safer communities and greater discussion about women’s right to justice.

Coordinated by Briana Love Cavion, MA candidate in Peace Education the UPEACE group joined women’s empowerment organization Blooms, The Humanitarian Foundation of Costa Rica, and the International League of Women for Peace and Liberty, among others, to attract hundreds of spectators in downtown San José’s Plaza de la Cultura.  http://www.youtube.com/watch?v=-QT6zznXiC4&feature=youtu.be

UPEACE students are grateful to Sr. Ricardo Méndez of Transportes CELAJES, a local transportation company, for donating transportation services to the group on Friday.

Members of the UPEACE community will be performing The Vagina Monologues in Ciudad Colon on March 7th , 2014 at 7pm in Ciudad Colon’s Teatro la Palestra.  The performance will continue to raise awareness about and encourage dialogue on women’s rights.