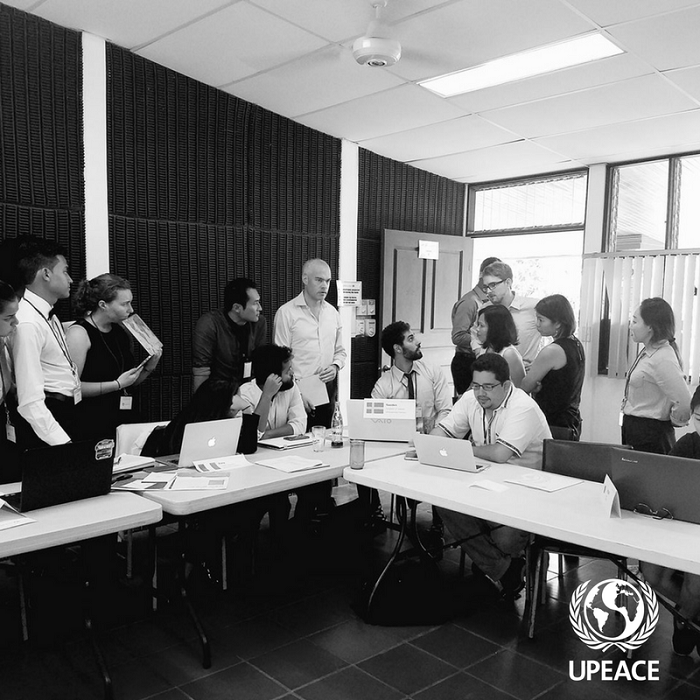 19-21 April 2017, UPEACE Campus, San José, Costa Rica. The 15th annual University for Peace Model United Nations Conference (UPMUNC) will be held on our campus from 19-21 April, 2017, under the theme “Peace Through Diplomacy”.

Since 2003, the annual University for Peace Model United Nations Conference (UPMUNC) has been a tangible and much celebrated embodiment of the University's relationship with the UN, attracting keynote speakers and special guests, as well as national and international conference participants, from the spheres of academia, international diplomacy, and civil society.

UPMUNC provides all participants with a true-to-life simulation of the kinds of negotiations that take place in the important committees and organs of the United Nations Organization, while an exceptional media team keeps the Breaking News updates and behind the scenes happenings of the conference entertaining and engaging for everyone.

The issues and themes that will be addressed during this model United Nations conference represent real and pressing concerns to the international community as a whole, such as the continued scourge of war and threat of nuclear weapons, the displacement of populations across and within borders, patterns of global environmental degradation and climate change, and the ongoing struggle for basic human rights, equality and justice for all. As in real life, these challenges can only be addressed through international engagement and cooperation among nations, as well as with NGOs and wider civil society – and not through isolationism and disunity.

This yearly event emphasizes the important role played by formal diplomatic structures such as the United Nations in preventing and responding to threats to international security and contributing to the noble pursuit of world peace. Given the complexity and transnational character of contemporary challenges faced by the international community, we believe that understanding and engaging with the international system is more relevant and necessary now than ever before.