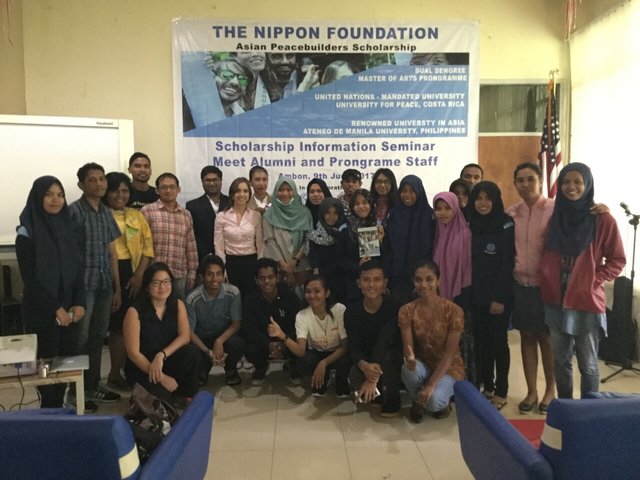 Between May 17 and June 9, the team visited Thailand, Laos, Japan, Cambodia, Philippines, Indonesia, and Sri Lanka. While in Bangkok, the team visited the Asia Center and Prachatai Online Newspaper, and the UN Compound. A promotional event was held with several alumni.

In Vientiane, Laos, the APS team held an informal promotional event with some alumni. They also visited VFI Laos and the Vientiane College.

In Tokyo, the team had meetings with the Ministry of Education, the Ministry of Foreign Affairs, the Foreign Policy Bureau and the Nippon Foundation. Several promotional events where organized, along with a visit to the Tokyo University of Foreign Studies.

While in Cambodia, Laurel and Maya organized a seminar on APS at the Royal University of Law and Economics, and also held an alumni networking meeting.

Resident UPEACE Professor and Head of the Department of International Law and Human Rights, Dr. Mihir Kanade joined the tour in Manila, for an Orientation Seminar with this year’s new APS students. The seminar was followed by meetings with the Ateneo de Manila University and the Nippon Foundation on APS matters.

In Indonesia, the team held two promotional events in Jakarta, where they also met with the Ministry of Education. From there, they visited the area of Zulfirman Rahyantel, followed by Ambon, where they held a promotional seminar with partners American Corner, UNPATTI and Nonviolent Study Circles. They also visited Heka Leka, an NGO working on peacebuilding in the area.

Last but not least, the team spent four days in Colombo, Sri Lanka, meeting with the Ministry of Higher Education and Highways, and offering promotional seminars at KDU, a military university, the University of Kelaniya, the University of Colombo, the UN Compound, and the Peace and Reconstruction Body. The tour ended with an alumni networking dinner.