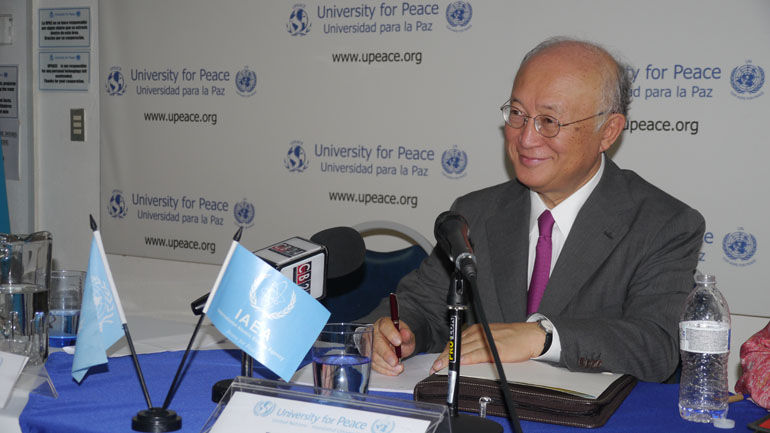 27 January 2016. University for Peace Campus - In an effort to contribute to the essential dialogue around atomic energy, the University for Peace (UPEACE), the Costa Rican Ministry of Science, Technology and Telecommunications, and the Costa Rican Ministry of Foreign Affairs jointly organized a conference by Director General of the International Atomic Energy Agency, Ambassador Yukiya Amano, titled “The contribution of the IAEA to Peace and Development”.

The IAEA is an intergovernmental organization based in Vienna, a global centre for cooperation in nuclear applications, energy, science and technology, whose goal is to promote safe, secure and peaceful nuclear technologies and prevent the proliferation of nuclear weapons. Is one of the most important agencies of the United Nations in the political sphere, for its role in the control of nuclear weapons and preventing peace.

During the Conference, Mr. Amano stated that the essential values promoted by the University for Peace are consistent with those of the IAEA:

“I know that the University does important work in areas including peace and security, sustainable development and climate change. These are also key areas of the work of the International Atomic Energy Agency. Costa Rica joined the IAEA in 1965 and is active across a broad range of our activities”.

Furthermore, the Director General highlighted the IAEA’s contribution towards achieving 13 of the 17 of the 2030 Agenda’s Sustainable Development Goals, agreed upon in New York, in areas such as poverty, hunger, human health, clean water, affordable and clean energy, and climate change.

IAEA has been working closely with its Member States on these fundamental issues in an effort to help them achieve their development goals through the use of appropriate nuclear technology. In Costa Rica, for example, IAEA technical cooperation has focused on making irradiation facilities available for use in biomedicine and agriculture, helping to combat insect pests that are harmful to livestock and crops, to reduce the damage caused to mangos and other crops by the fruit fly, and to improve issues of cancer control.

The Conference was held at the UPEACE Campus, where students, faculty, staff, members of the Costa Rican Diplomatic Corps, and other special guests had the chance to ask Ambassador Amano questions and generate a debate regarding these issues.

You can read Ambassador Amano’s full speech here and view our interview with him here.