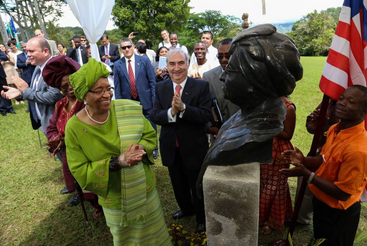 1 October, 2013. University for Peace Campus - University for Peace Rector, Dr. Francisco Rojas-Aravena, introduced the President by highlighting her leadership in promoting peace. "Liberia and Central America have experienced the effects of civil war, which have affected human development,” he said. "Mrs. Johnson Sirleaf is a global community leader that promotes development policies based on rights, especially those of women and young people.”

In her keynote address to the UPEACE student body, the first democratically elected African female president highlighted the role of women as leaders, gender equality, and the importance of youth as a catalyst for development and peace.

"We know that to maintain peace we must make education and employment of our youth a paramount commitment of governance.” Johnson Sirleaf also specifically referred to the case of Liberia, where 60% of the population is under 35 years. During her first visit to Central America, the Liberian president unveiled a bust erected in her honor in the "Garden of Nations" at the University for Peace campus.

In addition to the UPEACE students and professors, diplomatic representatives and members of international organizations were also present at the event.

Following the ceremony, President Johnson Sirleaf met with her counterpart, Laura Chinchilla, President of Costa Rica, who hosted a lunch at the Museum of Contemporary Art in San Jose

74-year old Ellen Johnson Sirleaf was born in Monrovia, Liberia. A military coup in 1980 sent her into exile, but she returned in 1985 to speak out against the military regime.

When she won the 2005 election, Johnson Sirleaf became the first female elected head of state in Africa. In 2011, she was one of a trio of women to win the Nobel Peace Prize. The Nobel Peace Prize 2011 was awarded jointly to Ellen Johnson Sirleaf, Leymah Gbowee (Liberia) and Tawakkol Karman (Yemen) "for their non-violent struggle for the safety of women and for women's rights to full participation in peace-building work." Ellen Johnson Sirleaf also served as Minister of Finance under President William Tolbert from 1979 until the 1980 coup d'état, after which she left Liberia. Her most important book is entitled "Women, War, Peace: The Independent Experts' Assessment on the Impact of Armed Conflict on Women and Women's Role in Peace Building." She studied at Harvard University (1971), University of Colorado at Boulder (1970), University of Wisconsin-Madison (1964), College of West Africa, John F. Kennedy School of Government, and Wisconsin School of Business.