Emotional speech by UPEACE Rector, Dr. Francisco Rojas Aravena, at the High Level Forum on Culture of Peace at the United Nations

Emotional speech by UPEACE Rector, Dr. Francisco Rojas Aravena, at the High Level Forum on Culture of Peace at the United Nations 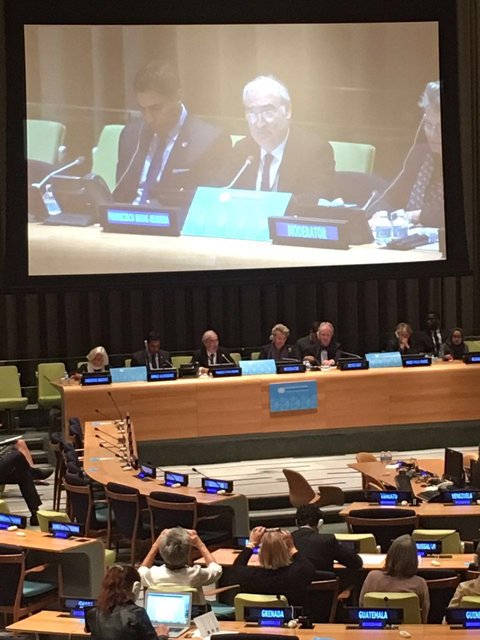 In his speech Dr. Francisco highlighted the role of the United Nations, the General Assembly as well as the Security Council in intercultural dialogue and cooperation initiatives in the midst of conflict.

The Rector also reminded the audience the leading role played by the University in educating peacemakers around the world; "If you want peace, prepare for Peace" is the slogan on which the university was founded.

Dr. Rojas made a special emphasis on the challenges for youth, because there are new opportunity scenarios, primarily in the field of new communications technologies that have globalized the ways of relating to others. However, he warns about the threats it brings as a mobilizer of new forms of violence in which those who kill or who die are young people.

Starting from the approval by the Security Council last year on youth, peace and security, he highlighted the key role of women and men, and in general of young people, in building a lasting peace that addresses all forms of violent extremism.

"Peace is what allows the exercise of rights. There are no Human Rights in contexts of violence and war. Promoting peace is a permanent task". The Rector highlighted the existing mutual relationships between peace and development as inseparable elements, because as long as there are contexts of peace it is possible to have well-being and development for all.

He could not leave Colombia behind during his speech and sent a greeting to the peace agreements, that no matter the result of the plebiscite, are a resounding success for finally silencing the weapons and reassuring the spirits from the perspective of understanding, forgiveness and reconciliation.

Finally, he stressed education as the best instrument to positively transform conflicts and as an important strategy to empower, educate and train young people because, in "If we want peace, we need to prepare peace". Reiterating with this phrase, the commitment of the University for Peace to work for it.