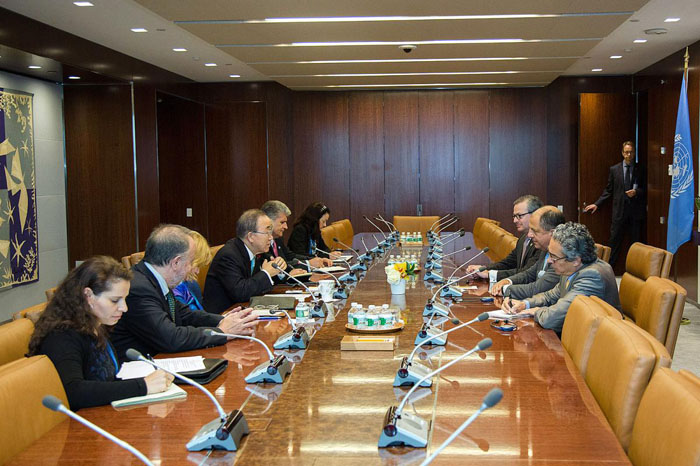 1 October, 2015- UN Headquarters, New York - This week, President of Costa Rica, Luis Guillermo Solís, reaffirmed the commitment of the Costa Rican Government with the University for Peace (UPEACE) during meetings held within the framework of the 70th Session of the UN General Assembly with representatives from the United Nations and UNESCO, as well as other members of the Costa Rican Government, including First Lady of Costa Rica, Ms. Mercedes Peñas Domingo, who is also a member of the UPEACE Council and an Alumna, and the Permanent Representative of Costa Rica before the United Nations, Juan Carlos Mendoza.

“The University for Peace, which celebrates its 35th Anniversary, is considered an extension of the Costa Rican foreign policy”, stressed President Solís, when pronouncing the willingness to support the institution by reorienting it financially and academically; a key center that educates new leadership in conflict resolution, peace education and sustainable development.”

UNESCO Director-General, Irina Bokova, welcomed expressed her desire to participate in this development process and accompany these efforts.

As part of these bilateral meetings, the President also spoke about UPEACE with the Secretary-General of the United Nations, Ban Ki-moon; UN Chef de Cabinet, Susana Malcorra; Executive Secretary of the Economic Commission for Latin America and the Caribbean (ECLAC), Alicia Bárcena; and Director of the Office of the UN Secretary General´s Chef de Cabinet, Fernando Blasco. Ms. Bárcena and Mr. Blasco are also members of the UPEACE Council.