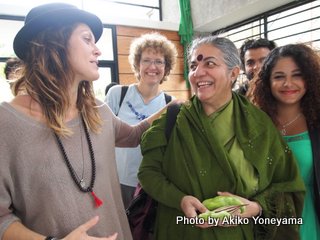 21January, 2014. San José, Costa Rica -  Vandana Shiva – world-renown environmental activist and author – spoke at the University for Costa Rica during the “Seeds of Freedom and the Fight Against Transgenics” conference. As part of the Hunger, Food Security and Food Sovereignty class, 23 UPEACE students attended the press conference with Professor Brian Dowd-Uribe, Professor in the Department of Environment, Peace and Security.

Vandana Shiva spoke passionately about the threat of genetically modified seeds and monoculture agriculture to peace and biodiversity.

“Monocultures are a declaration of war,” Shiva explained. She continued, “They destroy the ability of ecology to perform its natural functions.” And later, “When there is nothing else but Monsanto [genetically modified] seeds on the market, farmers have no choice. This is war on democracy.”

Shiva went on to say that traditional, agro-ecological farming systems across the world are being transformed into a monopolized global food system that is dependent on transgenic crops and pesticides. In this system, seeds are being used as a powerful commodity by a few large corporations, like Monsanto, that seek to make a vast profit, no matter the true cost. Genetic engineering, she exclaimed, is a war at the genetic level. “We have a clear choice between war and peace; between monoculture and diversity, transgenics and agro-ecology, large scale green deserts and real food.”

The “Seeds of Freedom and the Fight Against Transgenics” Conference continued during the day with an organic farmers market and a variety of talks about the seed freedom movement in Costa Rica. The conference concluded in the evening with Vandana Shiva’s final talk given to a packed auditorium of hundreds of UCR students and supporters.

For many Environment, Development and Peace MA students at UPEACE, Vandana Shiva represents a powerful female voice in the fight against GMOs and a leader of the food sovereignty movement.

Her more than 20 books about eco-feminism and her quest to dramatically change the dominant food paradigm have profoundly inspired students.

“Vandana Shiva has been my ‘she-ro’ for many years. As a woman, she is one of the main reasons why I am as passionate about food rights and seed sovereignty as I am today. What an honor to be able to meet her as part of our Hunger, Food Security and Food Sovereignty class here at UPEACE.”