One in three children under-five do not officially exist - UNICEF

One in three children under-five do not officially exist - UNICEF 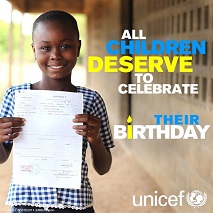 11 December 2013 - New York City - On UNICEF’s 67th birthday today, the organization released a new report showing that the births of nearly 230 million children under-five have never been registered; approximately one in three of all children under-five around the world.

“Birth registration is more than just a right. It’s how societies first recognize and acknowledge a child’s identity and existence,” said Geeta Rao Gupta, UNICEF Deputy Executive Director. “Birth registration is also key to guaranteeing that children are not forgotten, denied their rights or hidden from the progress of their nations.”

Globally in 2012, only around 60 per cent of all babies born were registered at birth. The rates vary significantly across regions, with the lowest levels of birth registration found in South Asia and sub-Saharan Africa.

Children unregistered at birth or without identification documents are often excluded from accessing education, health care and social security. If children are separated from their families during natural disasters, conflicts or as a result of exploitation, reuniting them is made more difficult by the lack of official documentation.

“Birth registration – and a birth certificate - is vital for unlocking a child’s full potential,” said Rao Gupta. “All children are born with enormous potential. But if societies fail to count them, and don’t even recognize that they are there, they are more vulnerable to neglect and abuse. Inevitably, their potential will be severely diminished.”

Birth registration, as an essential component of a country’s civil registry, also strengthens the quality of vital statistics, aiding planning and government efficiency.

According to UNICEF, unregistered births are a symptom of the inequities and disparities in a society. The children most affected by these inequities include children from certain ethnic or religious groups, children living in rural or remote areas, children from poor households or children of uneducated mothers.

Programmes need to address the reasons that families do not register children, including prohibitive fees, unawareness of the relevant laws or processes, cultural barriers, and the fear of further discrimination or marginalization.

UNICEF is using innovative approaches to support governments and communities in strengthening their civil and birth registration systems. In Kosovo for example, the UNICEF Innovations Lab has developed an efficient, effective, and low-cost means of identifying and reporting unregistered births, built on the RapidSMS mobile-phone based platform.

In Uganda, the government – with support from UNICEF and the private sector – is implementing a solution called MobileVRS that uses mobile phone technology to complete birth registration procedures in minutes, a process that normally takes months.

“Societies will never be equitable and inclusive until all children are counted,” added Rao Gupta. “Birth registration has lasting consequences, not only for the child’s wellbeing, but also for the development of their communities and countries.”

Attention broadcasters: Video stories and photos are available at http://weshare.unicef.org/mediaresources

UNICEF promotes the rights and wellbeing of every child, in everything we do. Together with our partners, we work in 190 countries and territories to translate that commitment into practical action, focusing special effort on reaching the most vulnerable and excluded children, to the benefit of all children, everywhere.

For more information about UNICEF and its work visit: www.unicef.org