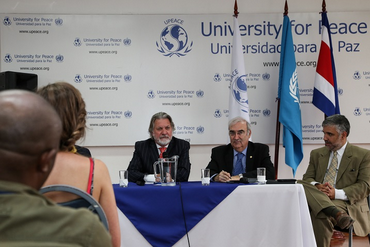 The representatives met with the Rector of the University, Dr. Francisco Rojas Aravena, and the Dean of Academic Affairs, Juan Carlos Sainz-Borgo, in order to discuss about the current challenges of peace and diplomacy, and the role of the University in international affairs and possible future collaborations between UPEACE and the Chilean government.

Ambassador Pablo Cabrera also gave a lecture to the students entitled "Diplomacy and Global Governance", to highlight the role of diplomacy in the world in terms of Human Rights and democracy. "The value of Diplomacy is the contribution to peace, cooperation, development and settling down disputes", added Mr. Cabrera.

At the end of this presentation, Mr. Cabrera and Mr. Gonzalez had an open session of questions with the students and professors.