Strengthening cooperation opportunities between UPEACE and Argentina, Spain and the Netherlands

Strengthening cooperation opportunities between UPEACE and Argentina, Spain and the Netherlands 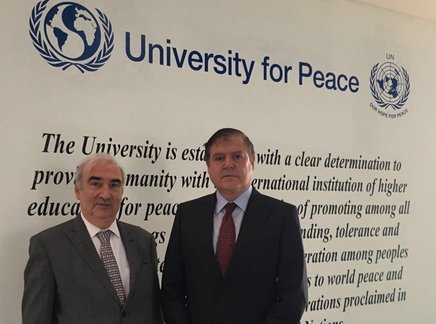 One of the key issues discussed at the meeting was the promotion of scholarship programmes for study and research for nationals of these countries interested in participating in master's programs and doctoral studies at UPEACE.

The University also informed the ambassadors on the actions that it has been leading around solutions to climate change, energy and sustainable development, peace and education, people trafficking, and a current issue, the Central American migration.

The latter issue was particularly relevant given the situation that Costa Rica is facing as transit country for migrants ascending from Ecuador, through Colombia, Panama and Costa Rica. The Rector of UPEACE, Dr. Francisco Rojas Aravena, reiterated his commitment to migrant and refugee population in Costa Rica with the pilot project for refugees for the Northern Triangle of Central America, in the framework of an agreement that the Costa Rican government has signed with the US government, in which Costa Rica will serve as temporary receiver of people who have sought refuge in the United States. The role of UPECE will be decisive in the welcoming process of families because they receive academic training in issues of citizenship and coexistence, multiculturalism, English and other important subjects to be able to assimilate a foreign culture.

With these projects, the University for Peace continues to confirm its commitment to peace, coexistence, and the vindication of Human Rights.
Thus, the visit of the Ambassadors represented a new academic building cycle around issues of peace, diversity and sustainable environmental development, relevant not only for the University but for the whole world.