The University for Peace Celebrates Commencement 2017

The University for Peace Celebrates Commencement 2017 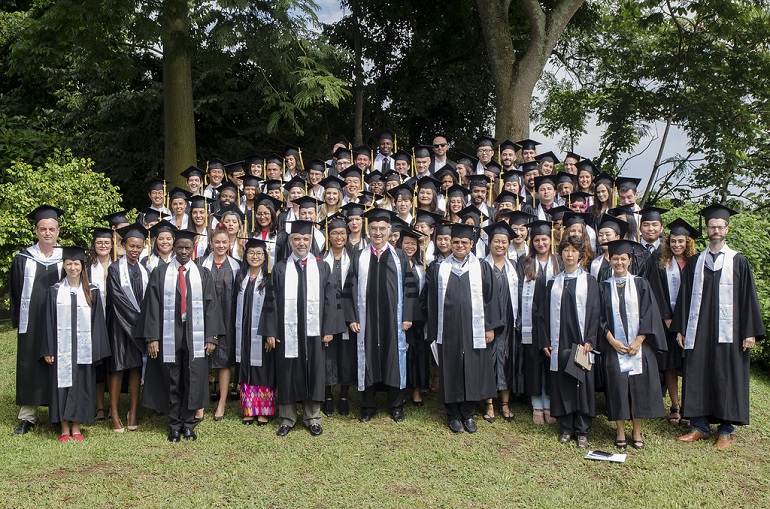 San Jose, Costa Rica, Rodrigo Carazo Campus, University for Peace, 9 June 2017. On 9 June 2017, the University for Peace (UPEACE) celebrated its 2017 Commencement Ceremony on its Rodrigo Carazo Campus. A total of 118 students representing more than 40 countries celebrated the conclusion of their academic year and the beginning of a new chapter in their personal and professional lives.

In his introductory speech, Rector Francisco Rojas indicated that the ethical values of the culture of peace, expressed through prevention and incorporated through education, are what allow us to facilitate peaceful coexistence. Always remember, “If we want Peace, we must educate for Peace.” Building a better world for all people, for the entire planet, one that generates prosperity and progress for all, requires building Peace, which constitutes the base of all rights, and only within this context, can the protection and promotion of human rights exist.

When addressing the Class of 2017, he told students: “We recognize, in each one of you, the vocation for Peace. Working for peace within the current international context is a demanding task, considering the current climate of violence throughout the planet. At the University for Peace, you have developed tools that will allow you to search for new answers.  The response provided by the United Nations as the best option for humankind, currently being promoted in every region across the globe is “Transforming Our World: The 2030 Agenda for Sustainable Development.” This is the best option thus far to combat exclusion, inequality and transnational crime. This global guiding policy places people at the centre of the search for prosperity and inclusionary progress with the ultimate goal of harmony and protection of the earth and all of its inhabitants. International cooperation is the most fundamental instrument in the pursuit of this goal. However, cooperation is currently under threat by unilateralism and polarization. Each one of you has realized this goal through your own personal efforts, in addition to the love and support of family, friends, mentors, and your new network of UPEACE peers and dedicated faculty and staff. Your time at UPEACE has allowed you to gain a fresh perspective on the world as well your own personal and professional objectives for the future, which will be forever influenced by this year and all the goals you have achieved while at UPEACE.”

Keynote Speaker Ana Helena Chacon, Vice President of Costa Rica, went on to congratulate the Class of 2017 and deliver a speech on the importance of social development for progress and peace. Vice President Chacon assisted the Academic Staff of the University in granting a UPEACE Doctoral Degree to Mr. Wyclife Ong'eta Mose, as well as in individually congratulating the Class of 2017 for their achievements.

Among the distinguished guests were representatives from several Diplomatic Missions in Costa Rica and international organizations working in Costa Rica, who celebrated the achievements of the Class of 2017 alongside the students’ family and friends, many of whom travelled halfway across the world to be present at this event.

Since its creation by the UN General Assembly in 1980, UPEACE has attracted students representing over 100 nationalities who have completed its academic programmes and are currently working in a variety of institutions in the field of peace and conflict studies, including local governments, local and international NGOs, universities, and United Nations-related bodies, among others.