The University for Peace dialogues with the Government of Japan

The University for Peace dialogues with the Government of Japan 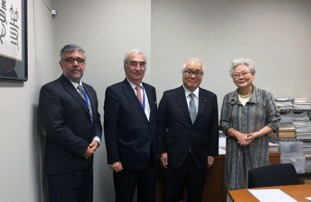 5 October, 2015. Tokyo, Japan - The Rector of the University for Peace (UPEACE) - Dr. Francisco Rojas Aravena – had an intense working session in Japan on 28-29 September 2015. The objective of this visit was to build up the mandate of UPEACE and the need to promote the support of its academic programmes.

During his visit with the Minister, Rector Rojas and Minister Hayashi exchanged views on the effects of climate change and sustainable development. The Minister stressed that there are winners and losers across the world and that academic analysis is essential to better understand the different and contradictory situations that occur, including the emergence of new conflicts and potential areas of cooperation.

Senator Keizo also spoke with Rector Rojas about human development and the importance of a holistic view on the subject. Of particular interest to Senator Takemi was the link with global health and, in this regard, he referred to the world conference on global health as an essential part of human security, to be held next year.

During his visit with Member of the House of Representatives, Masaharu Nakagawa, the UPEACE delegation exchanged views on the importance of education as an essential instrument for peace, and in this sense, he reaffirmed their interest in contributing with the education of new generations of young Japanese professionals in this field.

During this visit, UPEACE representatives also discussed the importance of the reforms being carried out within the UN and the role that the University for Peace plays within that system, particularly with regards to the academic reforms implemented over the past year, as well as the legislative reforms that Japan has adopted in order to adapt to this new international reality.

The UPEACE delegation was led by UPEACE Rector, Dr. Francisco Rojas Aravena, who was accompanied by Dean for Academic Affairs and Associate Professor at UPEACE, Dr. Juan Carlos Sainz-Borgo and M.A. Laurel Gaylor, Project Coordinator for the Asia Pacific area and a UPEACE Alumna.