The University for Peace opens its first Programme in Spanish “Masters in Conflict Resolution, Peace and Development” with a conference by the Colombian Ambassador

The University for Peace opens its first Programme in Spanish “Masters in Conflict Resolution, Peace and Development” with a conference by the Colombian Ambassador 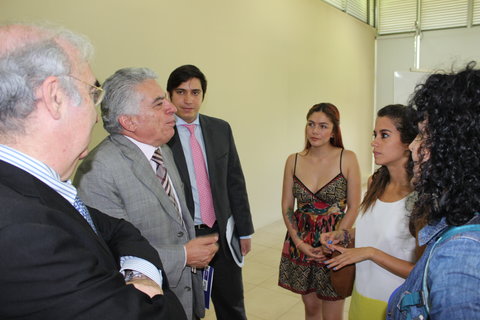 29 September 2016. Universtiy for Peace Campus - On Thursday September 29, the University for Peace received the Ambassador of Colombia in Costa Rica, Jesus Ignacio Garcia Valencia, accompanied by his consul Camilo Espinosa Martín Arias.
The event was held at the Rodrigo Carazo Odio Campus and was attended by the Rector Dr. Francisco Rojas Aravena, the dean of the University Juan Carlos Sainz-Borgo and of course students of the Masters Programme in Spanish. The appointment established a context on the signing of the peace process in Colombia, placed the details of the plebiscite on October and aimed, among others, to inform those attending the event.

The meeting began with a brief introduction to the Colombian context; in which he stressed that violence appears in the 40s with the rural struggle between liberals and conservatives that stained with blood the Colombian countryside and left the civil society in bipartisanism. The importance of the assassination of liberal leader and presidential candidate of Colombia, Jorge Eliecer Gaitán, for Colombian history was highlighted, along with the way it sparked national outrage that unleashed waves of violence in both major cities and in rural Colombia. The historical contextualization ended with the story of the rise of the FARC guerrilla as an illegal armed group composed of farmers, tired of the bipartisan violence that later would be strengthened as the oldest insurgent group in Latin America.

During his presentation, the Ambassador said that the Colombian conflict dates back more than 60 years and has left behind 260,000 dead, 25,000 missing, 30,000 kidnapped, 6,000,000 displaced and a total of more than 8,000,000 casualties. Therefore, the current peace process represents a negotiated solution to the scourge of violence that has only stripped of dignity and rights for all Colombians.

The Colombian Ambassador explained in detail the agreements signed in Havana Cuba, host country of the negotiations between the government of Juan Manuel Santos and the guerrillas of the FARC-EP, underscoring the nature of a negotiation with multiple actors because this process, unlike other existing in the world, is positively highlighted by involving civil society, the military, the Catholic church and, of course, the victims of armed conflict.
Following the conference, attendees asked several questions on important points of the agreement such as the political participation of former combatants, the global problem of drug trafficking, reintegration of the guerrillas, the surrender of weapons and land reform. The students also had the opportunity to chat with the Ambassador, as shown in the picture above.
The event developed with the occasion of the opening of the Master's program in Conflict Resolution, Peace and Development, it was very positive and productive for attendees who undoubtedly clarified some of their doubts about this process and had the opportunity to closely meet with Colombian history.
To close the event, the Rector offered words of appreciation for the visit of Colombian representatives and reminded the students about the importance of contributing to building a more peaceful society and reiterated the commitment of the University with peace in Colombia.