The University for Peace will celebrate Commencement 2015

The University for Peace will celebrate Commencement 2015 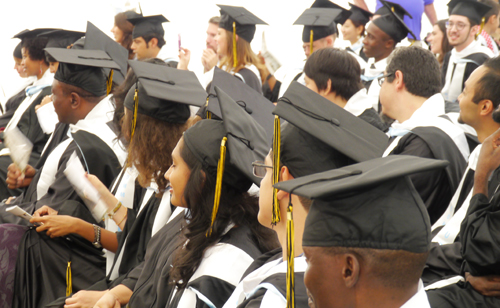 The University for Peace is honoured to have Ms. Mercedes Peña Domingo, First Lady of Costa Rica, Member of the UPEACE Council and Alumna as its Keynote Speaker.

Under the mandate of the United Nations, the University for Peace currently offers nine face-to-face MA programmes and one online MA programme in the fields of environment, development and peace, gender, international law and human rights, and peace and conflict resolution.

UPEACE was established in 1980 by the General Assembly of the United Nations based on an initiative of the Government of Costa Rica. Since its creation, students representing over 100 nationalities have completed its academic programmes and are currently working in a variety of institutions in the field of peace and conflict studies, including local governments, local and international NGOs, universities, and United Nations-related bodies, among others.

The next academic year will begin in August 2015. For more information on admissions to UPEACE, please visit www.upeace.org.

Originally from Madrid, Spain, Mercedes Peñas earned her undergrad degree in Political Science and Sociology with a specialization in International Relations and Latin American Studies from the Complutense University of Madrid in Spain. She also has a Master's Degree in International Relations from the UN-mandated University for Peace, where she is currently a member of the Council as Representative of the Costa Rican Government.

Since 1997, she has been professionally connected to the Foundation for Local Development and Municipal and Institutional Strengthening in Central America and the Caribbean (Demuca Foundation) as head of research and missions for the strengthening of local governments in countries such as Panama, El Salvador, Honduras, Guatemala, Dominican Republic, Nicaragua, Costa Rica, Haiti, Cuba and Ecuador. In 2007, she became the Foundation's Executive Director.

Mrs. Peñas has also collaborated with international organizations such as the International Union for Conservation of Nature (IUCN), the Rainforest Alliance, the United Nations Development Programme (UNDP) and the Inter-American Institute for Cooperation on Agriculture (IICA).

As First Lady of Costa Rica, Mercedes Peñas is heavily involved in territorial development, coordinating – alongside the Ministry of National Planning and Economic Policy, the Institute for the  Institute of Development and Municipal Advisory (IFAM), the Rural Development Institute (INDER), and the National Directorate of Community Development (Dinadeco), an integrating process where public and private actors are able to articulate efforts with a view of managing social transformations and economic development in particular territories.