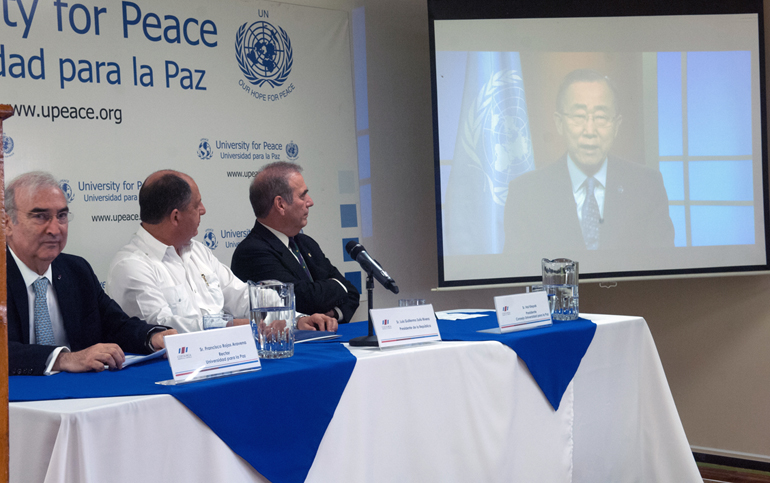 5 December 2015. University for Peace Campus - The University for Peace (UPEACE) celebrated its 35th Anniversary on 5 December 1980 with a high-level international seminar titled “Conflict and Alternatives to Peace in the 21st Century: New Wars, New Solutions”, which brought together renowned international personalities in the field of human development, peace, and security.

UPEACE Rector Dr. Francisco Rojas Aravena kicked off the activity with an opening speech commemorating the actions of a visionary man, the late President Rodrigo Carazo Odio (1978-1982), whose passionate appeal before the UN General Assembly 35 years ago for the creation of a higher-education institution dedicated to the study of peace and conflict resolution, gave way to an institution whose mission, in light of the current climate, becomes not only relevant but essential. Rector Rojas recalled President Carazo’s powerful words: “If you want peace, prepare for peace. I propose the creation of an institution that prepares people for peace”.

Dr. Rojas continued, “the University for Peace is more relevant than ever. Geopolitical factors are still in vogue. The nuclear threat is an actual menace. Traditional conflicts manifest themselves in different parts of the world. Bordering tensions are affecting major powers as well as small states. The largest number of victims is expressed today in intra-national wars. Our job is to contribute to the analysis and study of new conflicts. Along with education, we should generate recommendations that facilitate the prevention, de-escalation, and mitigation of both traditional and modern conflicts”. Rector Rojas also highlighted the impact of UPEACE within a conflicted world – making a special emotional reference to several terrorist attacks throughout history – and finished his speech by publicly recognizing staff members with over 20 years of dedicated service to UPEACE.

Perhaps of one the highlights of the seminar was the video message from Secretary-General of the United Nations, Ban ki-Moon, in which he congratulated UPEACE on its 35th Anniversary, stating “the University for Peace is one of the world’s leading teaching centres in the fields of peace and conflict resolution… Today, UPEACE is exploring how education can further help to address the many crises of our time and build a safer, more just, and sustainable future for all.” The Secretary-General concluded by reaffirming his support, and that of all Member States of the United Nations, to the important work being carried out by the University for Peace. The seminar’s inauguration also included a video message from UNESCO Director-General, Irina Bukova, and President of the UPEACE Council, Dr. Hal Klepak.

The final inaugural speech was given by the guest of honour, President of Costa Rica Luis Guillermo Solís, who congratulated UPEACE for its role and positive impact on the world throughout its 35-year history, highlighting the fact that the institution has had the important responsibility of building knowledge to foster tolerance and peace among all societies. “On behalf of the government of Costa Rica”, stated President Solís, “I transfer our congratulations and our recognition, for what I think has been an extraordinary success story, with its lights and shadow – but mainly its lights, which are many – reflected in the more than 1,600 graduates of this university”. Also in attendance were First Lady of Costa Rica and UPEACE Alumna and Council Member, Mercedes Peñas Domingo, government and diplomatic corps representatives, UPEACE students, alumni, and faculty members, and other special guests.

This seminar was held over the course of two days and was divided into seven panels. The first panel, “The New International Architecture of the 21st Century”, included a video message from Susana Malcorra, former UN Chef de Cabinet and recently-elected Minister of Foreign Affairs of Argentina; a video from  Alicia Bárcena, ECLAC Executive Secretary; and interventions by Pilar Álvarez-Laso, UNESCO Regional Director for Central America and Mexico; Pelayo Castro, Ambassador to the European Union in Costa Rica; Michael E. Brown, Professor of International Affairs and Political Science at George Washington University; and José M. Cruz SJ, Vice President for University and Global Relations at Ateneo de Manila University (Philippines). The panel was moderated by UPEACE Rector Francisco Rojas Aravena.

Other current affairs were discussed in the second panel, “The Strengthening Governability and the Rule of Law Through Cooperation”, was moderated by Juan Carlos Sainz-Borgo, UPEACE Dean for International Cooperation and was integrated by Helen Ahrens, Director of the Access to Justice Project, German Cooperation Agency; Josette Altmann, former First Lady of Costa Rica and current Professor at the University of Costa Rica; and Montserrat Solano Carboni, Costa Rican Ombudsperson. This panel was followed by a lecture from the Honourable Elizabeth Odio Benito, recently-elected Judge of the Inter-American Court of Human Rights, whose lecture on “Access to Justice and the International Justice System” included an introduction by Joseph Thompson, Director of the Inter-American Institute of Human Rights.

The second day of conferences began with panel 3, titled “Conflict, Post-Conflict, and South-South Cooperation”, which included interventions by Tony Karbo, Director of the UPEACE Karamoja Cluster Project; Leonor Calderón, SEGIB Director for Central America, Dominican Republic, Haiti, and Cuba; and Hal Klepak, President of the UPEACE Council and Professor Emeritus of History and Strategy at the Royal Military College of Canada. The panel was moderated by Ana Teresa Dengo, Costa Rican Ambassador before the CBTTO.

Panel 4, focused on “The New Threats to Peace”, was composed of Chantal de Jonge Oudraat, President of Women in International Security; Amr Abdalla, Senior Advisor on Policy Analysis and Research at the Institute for Peace and Security Studies (Addis Ababa) and former UPEACE Vice Rector; and Rolain Borel, Former Head of the UPEACE Environment and Development Programme. The panel was moderated by Pericles Gasparini, Chief of the United Nations Office for Disarmament Affairs (UNODA).

The final panel on “Strategic Studies and Intelligence for Peace”, included presentations from  Miguel Sánchez, Deputy Director General of the National Centre for Intelligence at the Ministry of the Presidency of Spain; Miriam Kornblith of the National Endowment for Democracy; General Rafael Parra Garzón, Deputy Director General of the National Police of Colombia; and a video message from Parvati Nair, Director of the United Nations University  Institute on Globalization, Culture and Mobility (Barcelona). This final panel was moderated by Samuel Ewusi, Director of the UPEACE Africa Programme.

The closing remarks were delivered by the Costa Rican Minister of Foreign Affairs, Manuel González Sanz, who congratulated UPEACE on its anniversary and reiterated the Costa Rican Government’s support of its mission.