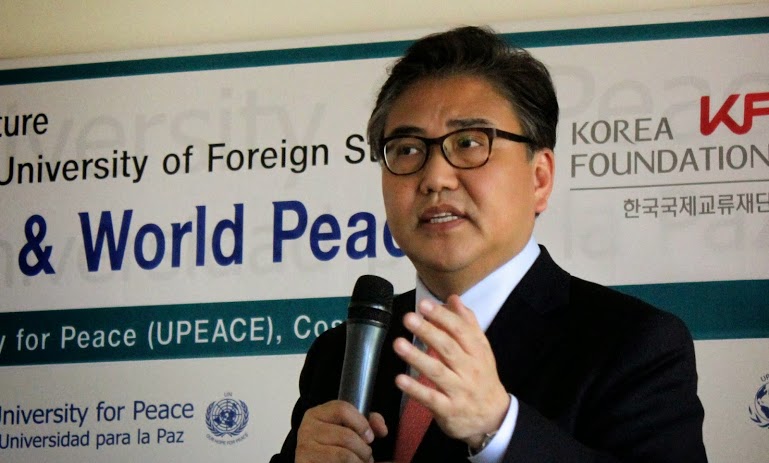 Dr.  Park also referred to the key role of the University for Peace as an academic institution that gathers young students from all over the world to understand the nature of current challenges and strive for solutions.

“I think this is an important and central venue for young people to create future visions for peace and prosperity for the global community”, said Dr. Park.

The Ambassador of  Korea to Costa Rica, Mr Hong-Jo Chun, accompanied Dr. Park and Dr. Young Chan Kim, also professor of Hankuk University who travelled along with Dr. Park for this visit.

The University for Peace and Hankuk University signed a cooperation agreement in 2007. This courtesy call was made after a visit of UPEACE Rector Francisco Rojas-Aravena to Korea in November 2013. On that occasion, Dr. Rojas invited Dr. Park to visit the UPEACE headquarters in Costa Rica and share his views with students of the academic year 2013/2014.

Professor Dr. Jin Park is a prominent academic and political figure in South Korea who has represented the Grand National Party in three sessions of the National Assembly in South Korea.

While in politics, he served as the Chairman of Foreign Affairs, Trade and National Unification Committee of the National Assembly during 2008-2010. He has been leading the Korea-Britain Society as its Executive President for the last six years and is a regular member of the Seoul Forum for International Affairs. He speaks Korean, English, Japanese, conversational Chinese and Spanish.