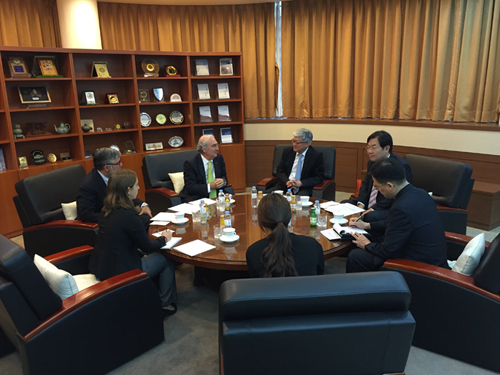 3 October 2015. Seoul, South Korea - From 28 September to 3 October, delegates from the University for Peace, led by Rector Francisco Rojas-Aravena, visited South Korea to complete a vast agenda, which included presenting the UPEACE mission and academic programmes to important organizations within that country, and to explore potential areas of collaboration and cooperation.

During its joint meeting with Wonkwang Digital University and Reverend Tea-Sung Kim – Assistant Secretary General of the Asian Conference of Religions for Peace/Korean Conference of Religions for Peace/International Peace Corps of Religions – Rector Rojas explained the mission of UPEACE and its activities, with specific mention of our online M.A. Both universities expressed that they are interested in building peace in Korea and Asia. The representatives from Wonkwang Digital University mentioned the possibility of exploring a dual M.A programme or hosting a UPEACE campus in Seoul, in addition to exchanging information and lessons learned with regards to online education, their area of expertise.

The UPEACE delegation also visited the Korea Foundation, where Rector Rojas-Aravena and Dean Juan Carlos Sainz-Borgo explained the importance of strengthening UPEACE’s ties with Korea, as well as their desire to establish a scholarship programme for Korean nationals supported by the Korean Government, similar to its current Asian Peacebuilders Scholarship Programme (APS), which UPEACE runs in partnership with the Ateneo de Manila University in the Philippines.

In an effort to expand its areas of collaboration in Korea, the delegation also called on the Korea National Diplomatic Academy, where Rector Rojas-Aravena introduced UPEACE and the importance of the Korean Government’s support, with a possible area of collaboration being a joint workshop or conference that would strengthen Korean Studies in Latin America, in addition to discussing the Koreans’ interest in UPEACE’s upcoming M.A. in Spanish, to begin in early 2016. The Academy requested the participation of UPEACE faculty members in workshops and events on topics of Latin American Issues, Peace and Conflict Studies, and Crisis Management.

A part of its agenda, the UPEACE Delegation was invited to the Korean National Assembly on 2 October, where it met with Sung Gon Kim, a member of the Assembly, and discussed the importance of obtaining the support of local governments in the search for global peace.

The delegation’s Korean Tour would not be complete without a visit to its partner university in that country, the Hankuk University of Foreign Studies, where UPEACE representatives met with President In Chul Kim; Jin Park, Endowed Chair Professor; Kim You-Kyung, Vice President of External Affairs and Development; and No Ho Park, Dean of Graduate School of International and Area Studies. During their meeting, both institutions discussed the possibility of opening up the opportunity to students from other graduate programs to attend UPEACE, and HUFS representatives expressed their pleasure at the entry of a former UPEACE/HUFS student to the UN.

The agenda in Korea concluded on 3 October with an Alumni gathering, during which they expressed their gratitude for the opportunity to meet with UPEACE authorities and a desire to hold similar events followed by a promotional event, organized by Representative Sung Gon Kim, for undergraduate and graduate students who worked with him on the International Day of Peace.