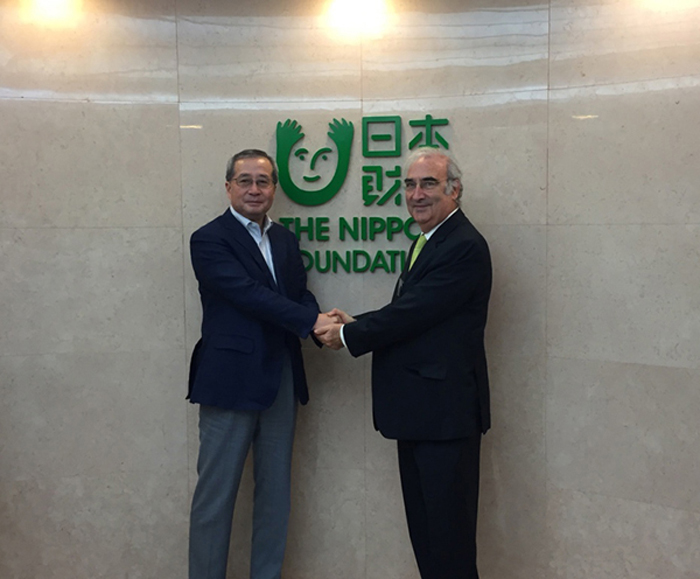 5 October 2015. Tokyo, Japan - Within the framework of the UPEACE mission to Asia, led by Dr. Francisco Rojas-Aravena, Rector of the University for Peace, an intense working session was held in Japan on 28-29 September 2015 in order to build up the UPEACE mandate and the need for the type of peace education that UPEACE offers through its academic and training programmes.

Together with Juan Carlos Sainz-Borgo – UPEACE Dean for International Cooperation – and M.A. Laurel Gaylor – Project Coordinator for the Asia Pacific area and a UPEACE Alumna – Rector Rojas-Aravena had a working meeting with The Nippon Foundation to evaluate the development of cooperation programs funded by this important institution in Japan. Ms. Ikuko Okubo, Project Coordinator for the Nippon Foundation and the Director of Development and Social Innovation for this institution, also participated in this meeting. This working session concluded with a visit to the President of the Nippon Foundation, Mr. Takeju Ogata, where the state of current and future cooperation projects were reviewed.

Subsequently, the Rector and his team had a meeting with Professor Shigeru Kochi, former Dean of International Cooperation and Professor of the School of Global Studies at Aoyama Gakuin University in Tokyo, to review the agreement between the two institutions and work on an agenda for the immediate future.

Finally, Rector Francisco Rojas-Aravena met with Dr. David Malone, Rector of the United Nations University (UNU) and Member of the UPEACE Council, to discuss the Secretary-General’s Report on UPEACE 2012-2015, to be presented before the General Assembly’s Fourth Committee later on this month, in addition to discussing other issues pertaining to both institutions’ project development goals.