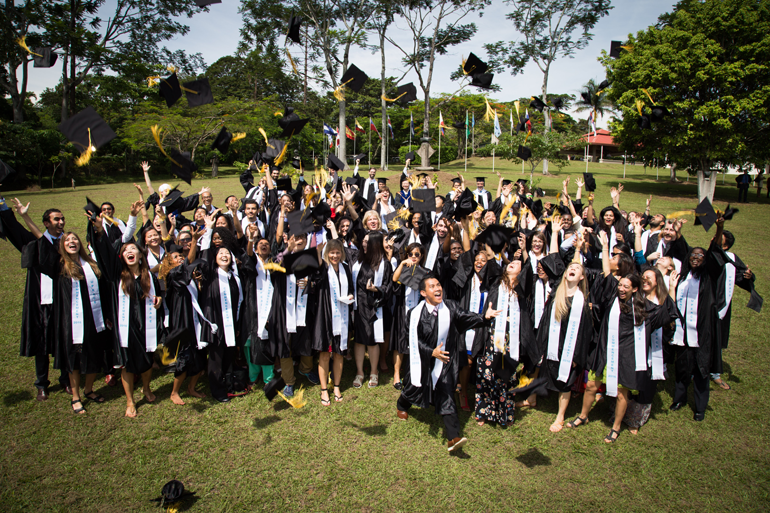 The Rector of the University for Peace, Dr. Francisco Rojas Aravena, officially began the ceremony by welcoming the special guests accompanying him on stage, as well as the new graduates, their family and friends, and all present guests. His speech bregan by recognizing the achievements of the past year: “Each one of you has accomplished this goal through your own personal efforts, and also in part thanks to the love and support of family, friends, mentors, and your new network of UPEACE peers and dedicated faculty and staff”.

Rector Rojas emphasized that graduates have acquired the theoretical and practical tools that allow them to have a positive impact on society. He also mentioned that working for peace is a fundamental challenge and that, in order to achieve the new sustainable development goals, several of which guide the University's work, we have to keep educating people for peace: “In each one of you we recognize a vocation for peace. Working for peace within the current international context can be a dangerous task, considering the violence occurring throughout today’s world. At the University for Peace you have developed tools that will allow you to search for new answers. Remember, 'If we want peace, we must educate for peace,' mentioned Dr. Rojas." (You can read the complete transcript of Rector Francisco Rojas Aravena’s speech here).

This year's Keynote Speaker was Ana Eugenia Duran, Senior Regional Advisor for the Americas for the International Organization for Migration, whose speech about migration reminded all presents of the new challenges represented by the current refugee crisis and how it has changed the world as we know it.

One of the event's more significant moments was the announcement of the first UPEACE Doctoral Degree Receipient, Dr. Mihir Kanade - current Head of the Department of International Law at UPEACE - who was introduced by Dean Juan Carlos Sainz Borgo in an emotional and very personal speech. (Read the full laudato by clicking the following link).

Among the distinguished guests were First Lady of Costa Rica and Member of the UPEACE Council Mercedes Peñas Domingo, former President of Costa Rica and Nobel Peace Prize Winner Dr. Oscar Arias Sanchez, as well as representatives from the Costa Rican diplomatic corps and international organizations.

Since its creation by the UN General Assembly in 1980, UPEACE has attracted students representing over 100 nationalities who have completed its academic programmes and are currently working in a variety of institutions in the field of peace and conflict studies, including local governments, local and international NGOs, universities, and United Nations-related bodies, among others.