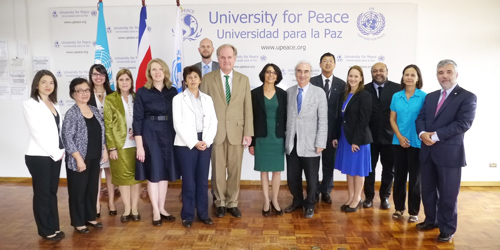 17 April, 2015. University for Peace Campus - The UN-mandated University for Peace (UPEACE) hosted the first meeting of a new cooperation initiative with over 10 partners, designed to provide scholarships and training for 140 women from around the world in the global south on peace-related topics.

The contribution of women to peace is critical, but they are still highly underrepresented among professionals and decision-makers in the fields of disarmament, non-proliferation and peace.

Educating women in these fields could therefore make a difference by further involving them in conflict resolution and the promotion of a culture of peace.

This new initiative is aimed precisely at broadening the participation of women in various peace-related fields in an effort to increase the number of female experts participating in the planning, decision-making and implementation of disarmament and non-proliferation activities.

Part of the new initiative is an online platform sponsored by the United Nations Office for Disarmament Affairs (UNODA) in Vienna, Austria, which will serve as a training centre clearinghouse for diplomats, military attachés, and other practitioners. The curriculum on disarmament and non-proliferation will be developed in cooperation with the Vienna Centre for Disarmament and Non-Proliferation (VCDNP).

UPEACE will then organize online and face-to-face courses worldwide with the support of various regional organizations. The first course of the series is expected to be held in Cairo, Egypt in cooperation with the League of Arab States (LAS) during the second half of 2015.

Funding for the scholarships and other activities to be carried out by the three-year initiative is provided for by the German government.

Other partners include the preparatory Commission for the  for the Comprehensive Nuclear-Test-Ban Treaty Organization (CTBTO), the European Academy of Sciences and Arts (EASA), The Hague Code of Conductagainst Ballistic Missile Proliferation (HCOC), the Inter Press Service (IPS), the League of Arab States (LAS), the Organization for Security and Co-operation in Europe (OSCE), the UN information Service (UNIS), the Vienna International School (UNIS), the United Nations Industrial Development Organization (UNIDO), the UN Office for Disarmament Affairs (UNODA), the United Nations Office of Drugs and Crime (UNODC), the University for Peace (UPEACE), the Vienna Centre for Disarmament and Non-Proliferation (VCDNP), and the Wassernaar Arrangement (WA).

The development of collaborative activities within the field of disarmament, developed with UNODA-VIENNA, will be coordinated from the UPEACE Center for Global Studies. It’s important to note that the University for Peace currently has an MA programme in Gender and Peace Building.

The Master of Arts Degree Programme in Gender and Peace Building offers critical knowledge and training in gender studies, which is a crucial aspect of any and all peace efforts. The programme delves into the diverse and international aspects of gender as they relate to violence, peace negotiations, peace building and peacekeeping in different locations on the planet. 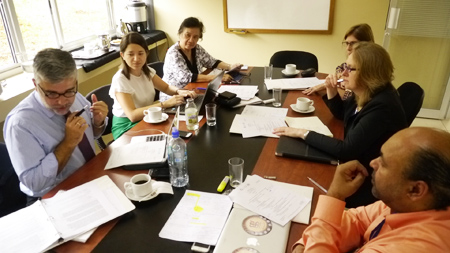