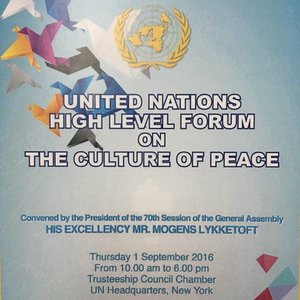 The event was attended by Dr. Francisco Rojas Aravena, rector of the University for Peace and Dean Dr. Juan Carlos Sainz-Borgo.

The forum brought together recognized defenders of Peace, as special guest Ms. Ouided Bouchamaoui, nobel Peace Prize 2015 and current member of the National Quartet for Dialogue in Tunisia. Mogens Lykketoft delved into global efforts that are suing to promote the culture of peace, now more relevant than ever.

Other relevant topics of the Forum were the Sustainable Development Goals and synergies with action programs on a Culture of Peace and the immediate reduction of armament spending to be reallocated to the achievement of "disarmament for development. "

In his speech, Dr. Rojas expressed his congratulations to the initiative around the Culture of Peace and reaffirmed the efforts made daily by the University for Peace to contribute to this objective. Peace enables the exercise of rights: "There are no Human Rights in contexts of violence and war. Promoting peace is a permanent task. "

In addition, he referred to the development, progress and welfare of each of the world's citizens regarding a better relationship with the planet, "As it progresses, peace promotes development. In contexts of peace it is possible to generate welfare processes. Peace today involves people and the planet. Serious environmental problems, along with economic and political ones, generate thousands of refugees and the failure of harmonious sustainable coexistence".

Dr. Francisco agreed with Mogens Lykketoft on the importance of women in the peaceful resolution of conflicts, as fundamental agents in the promotion of a Culture of Peace from home. Finally, he sent greetings to the peace agreement in Colombia, recalling the importance of forgiveness and reconciliation.

During the forum the President of the General Assembly reiterated the role of the United Nations in strengthening "intercultural and interfaith dialogue" and extended the invitation to all Member States to commit to a Culture of Peace.