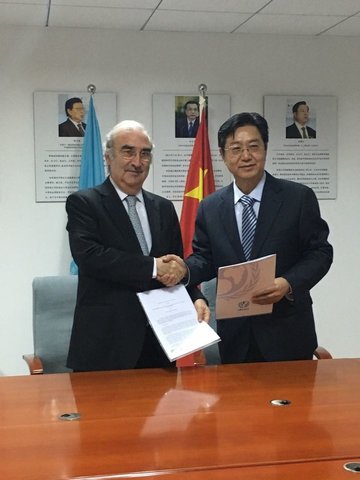 9 October 2016. China - The Rector and Dean were invited by the China International Council for the Promotion of Multinational Corporations (CICPMC) to establish a cooperation relationship between both institutions. This is the result of several meetings held between the Chinese Embassy in Costa Rica and UPEACE.

The CICPMC is a non-governmental organization approved by the State Council, registered with the Ministry of Civil Affairs and directly supervised by the Ministry of Commerce of the People’s Republic of China, is specially engaged in the work of multinational corporations in China.

During their visit, the Rector and Dean had the opportunity to meet with the President of CICPMC, regional and educational authorities and were able to visit Universities in Beijing and Datong as well as the Beijing Economic-Tecnological Development Area.

The visit ended with the signing of a Model of Understanding and the mutual willingness to deepen cooperation between both institutions.