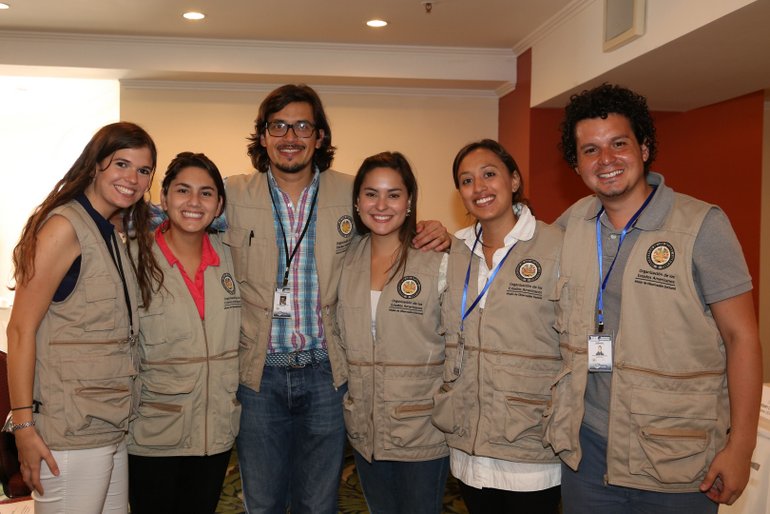 The monitoring mission was composed of students from the programmes of Gender and Peacebuilding, Responsible Management and Sustainable Economic Development, International Law and the Settlement of Disputes, and Media, Peace and Conflict studies. The students are citizens of Latin America as well as Europe, who worked as representative of the OAS and UPEACE  throughout the process.

“This process helped me to understand which aspects of the elections are monitored by the OAS and to better understand the reason behind the press releases that are submitted after the elections” stated Mariateresa Garrido, a student of International Law and the Settlement of Disputes from UPEACE.

Students observed the different stages of the electoral process in different parts of Costa Rica including Cartago, San Jose, Alajuela, and others. During their work as observers, the students had access to the voting receptors, with the authorization of the President of the table, in order to effectively observe the voting procedure. Additionally, they were present during the counting of the votes, at the end of the process, in the tables that they were assigned.

“This experience allowed me to see how so many people, from different political parties, were involved in the process, while they all work together for one common goal: the destiny of their country. These people do care for their nation and the result of that is of it being one of the most peaceful elections in the world”, stated Andreina Rodriguez, a Colombian student from the International Law and the Settlement of Disputes Programme.

“During my experience, I saw a new culture where people completely trust in the system and they do not see canvassing as a bad thing, but as part of their culture” stated Natalia Vega, student of International Law and the Settlement of Disputes.

The students also participated in the press conference given by the OAS’s monitoring mission, and they were later given certificates recognizing their work by the chief of the mission, Josefina Vazques Mota, as well as the sub-chief of the mission, Sara Mia Noguera, a UPEACE alumna.