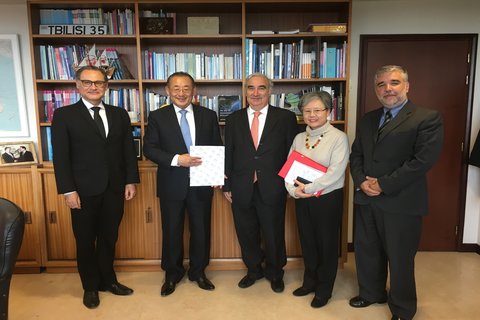 20 October 2016. Paris, France - Paris received on 20 October the visit of Dr. Francisco Rojas Aravena, Rector and Dr. Juan Carlos Sainz, Dean of the University for Peace, along with the Ambassador of Costa Rica, Jorge Arroyo. They met with regional representatives of UNESCO with the aim of exchanging proposals for cooperative development between the University and the Organization.

Since UNESCO is the main specialized organ in Science, Education and Culture of the Organization of the United Nations, it has sought to actively participate in building a work agenda focused on the Culture of Peace and international cooperation around the achievement of the Sustainable Development Goals.

Among the subjects that motivated this dialogue is the project called “Peace and Sports” which became an opportunity for cooperation between UPEACE and Qatar, country represented by Ambassador Moussa Ali Zainal.

Another meeting that took place in this scenario of cooperation was the meeting with a UNESCO Director General Representative, Qian Tang, Head of the education area, who took the opportunity to address the educational projects that bring together both institutions such as Peace Education, a subject in which the University is a leader in Central America, security for journalists and the development of Central America and the Caribbean.

The meeting closed with an invitation by UPEACE to UNESCO delegates to bond with UPEACE students who are the main engine for the construction of the Culture of Peace in the region.