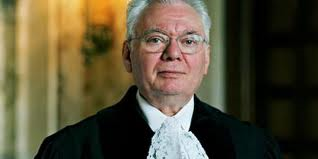 The ceremony will take place at the Inter-American Court of Human Rights in San José, on Friday, 22 August at 9:30 a.m. The  "Doctor Honoris Causa" will be given in recognition "for his outstanding career in international law, and his leadership and commitment in the promotion and protection of human rights".

Judge Thomas Buergenthal is the Lobingier Professor of Comparative Law and Jurisprudence at the George Washington University Law School in Washington, D. C. He is a member of the Ethics Commission of the International Olympic Committee, Honorary President of the Inter-American Institute of Human Rights, and a member of the Committee on Conscience of the US Holocaust Memorial Council.

He served as judge on the International Court of Justice (2000-2010), and as judge and president of the Inter-American Court of Human Rights (1979-91). Judge

Buergenthal has also served on the U.N. Human Rights Committee, the U.N. Truth Commission for El Salvador, the Administrative Tribunal of the Inter-American Development Bank, and the Claims Resolution Tribunal for Dormant Accounts in Switzerland.

Professor Buergenthal was the Dean of the Washington College of Law of the American University in Washington, D.C., from 1980 to1985, and has held professorships in international law and human rights at the State University of New York at Buffalo Law School, the University of Texas and Emory University

Law Schools, where he also served as the Director of the Human Rights Program of the Carter Center.

He graduated from Bethany College, WV. He received his Juris Doctor degree from the New York University Law School, and his Masters of Law and Doctor of Juridical Science degrees from the Harvard Law School.

He is the author of more than a dozen books and numerous articles on international legal subjects. His autobiography, A Lucky Child: Memoir of Surviving

Auschwitz as Young Boy (Little, Brown 2009, 2010), has been translated into more than a dozen languages.