Welcome Class of 2015 to the UPEACE Alumni Community!

Welcome Class of 2015 to the UPEACE Alumni Community! 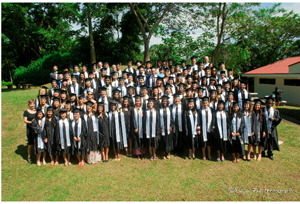 12 June 2015. University for Peace Campus - On 12 June 2015, the University for Peace celebrated its Commencement 2015 ceremony. More than 140 students representing at least 40 countries celebrated the conclusion of their academic year and the beginning of a new chapter in their lives. In the words of Jamili Natasha Gooneratne, Class Representative:

“…..I’ve spent the last couple of weeks trying to figure out what I was going to say to you and as I visualized all of us sitting here today, I couldn’t help but feel that we were exactly where we needed to be. Nothing has taught me this lesson more than my year here at UPEACE… When I picked a specific place to sit in class at the beginning of the year, it has resulted in friendships that I can’t imagine how I will do without when I leave this place. And as I’ve seen all of you throughout this year, forging strong friendships, some of you a little more than friendship, I can only imagine that you feel the same way.

Moreover, I know we are exactly where we need to be, because of the walls and barriers that have broken down in my mind and your place in that process: a heated discussion in class with someone I considered opinionated or bias, that person that makes you roll your eyes every time you hear them speak – I know each of you has that one person – that person and that heated discussion – has resulted in me realising that I am biased, I am opinionated, and that someone in class had a special eye roll with my name on it. And I know that many of you have already told me that this realisation has also been your main takeaway from your time here.

And I started to think about that while I was trying to write this speech, and about all the things we’ve been learning here at UPEACE, and one thing that came up was that we spend so many hours in classrooms, on social media forums and in everyday life in general, condemning governments, condemning states, and condemning political realities. And we are unable to comprehend how these injustices, in our own countries and abroad, can simply take place. But if we stopped for a second and took a look around the classrooms in which we learn, or the offices in which we work, at our individual levels, we would see that we compete for power, we attack when our perspective is under threat, we form coalitions, we fight, we deceive, we are dishonest, we are unwilling to compromise with positions that are alien from our own, and sometimes we allow perpetrators of abuses to go scot-free because we are unwilling to deal with the messiness of that situation. And more so, we often egotistically defend our positions even when we know that there is the strong possibility that it is us, and not the person sitting in front of us, who is in the wrong. And it isn’t difficult to then see, that we are the states that we condemn, and we are the problems that those states embody.

And I’m happy that so many of us have been able to keep our egos aside for a second, and honestly see these flaws in us, because this realisation can provide us with a lens with which to see the world anew. It allows us to see more than the injustice of the west, the imposition of the North or the stubbornness of the South, but to clearly see that we ourselves in our day to day lives, in the way we treat other people, are the North, are the South. And that the change that we hope to see in our capitols, and that the change that we hope to see at the United Nations itself, starts in our day to day conversations, in our interactions with one another.

And I have already seen a little bit of that change in our classrooms, I have experienced it in the conversations I have had with you, or in the conversations you didn't know I was eavesdropping on. I’ve seen us find common ground with someone that has views in complete opposition to our own. I’ve seen us understand a cultural context which 5 minutes previously we believed to be unacceptable. I’ve seen us go beyond the mainstream terms of a ‘dictator’ or ‘terrorist’ and attempt to address the root causes behind those terms and to address the political connotations in which they were labelled. This self-realization and this need to go further than what we simply know is important, because if we are not aware of our own biases, there is no way on earth that we will ever be able to change someone else’s – because true change, whether in the individual or at the state level, needs to come from within. And in understanding this individually, as a group, as a coalition, we have the ability to generate true change, true empowerment, regardless of how small that change or empowerment may seem to us. If 23 of you could put a random Sri Lankan, up on this podium – imagine what 150 of us can do together.

So when we leave here today, and we go back to the places we’re from, or places we’ve never been before, and when we start our new beginnings, there’s no doubt that we’ll encounter situations when we are measured for being too white, too black, too North, too South, too gay, too straight, to be in the places that we are at. And there may be still other situations such as with the passports which we possess, the nationalities assigned to us and the perceptions that those nationalities give way to, values that we have grown up with, the people that we are and places that we come from. And they will tell us that because of these things, we are found wanting. Let them.

Ms. Peñas concluded by reminding new Alumni of the ideas that UPEACE was founded on, stating that, “Since UPEACE was created, by request of the government of Costa Rica, the principles that have prevailed at this university where I studied and in this country where I live are based on respect, harmony, understanding, tolerance and cooperation. I urge you to work together to honour the principles that founded this university of which we are all part. No matter which part of the world we come from or where we’re going, may we always adhere to the highest values in building more democratic and fair societies and may we do so around the pillars of sustainable development, human security, and peace for the entire world."

Congratulations to the Class of 2015!