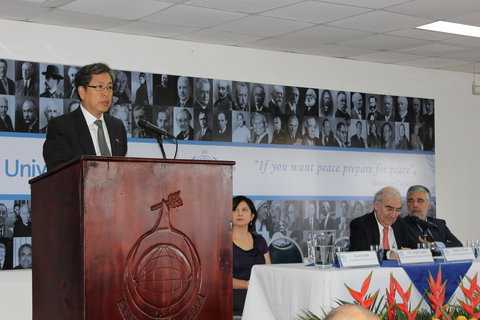 23 September 2016. University for Peace Campus - The University for Peace received the visit of Chinese Ambassador to Costa Rica Song Yanbin. The event that took place in the morning at the Council room, was attended by staff, faculty and students of all master's degrees from the University. The conference was also attended by the Russian ambassador, the consul of Spain and the Chilean Ambassador.
During his speech, the ambassador stressed China's active participation in peace missions around the world with a permanent squadron of 80,000 men, and its position as a permanent member of the Security Council of the UN. He also noted its continued participation in training peacekeepers to work in demining programmes.

The Chinese ambassador also spoke about the Sustainable Development Goals as a commitment to change the world, categorizing the elimination of poverty as the main objective to be achieved. He said sustainable development as a way to achieve prosperity and progress globally. Moreover, he emphasized that China is a peaceful nation committed to peace, development and international cooperation and proposed objectives to contribute more significantly to world peace, among which are: the construction of a society based on fairness and justice and promoting peaceful development and cooperation with developing countries to achieve their goals.

University students took the opportunity to ask questions about the current situation of Muslim minorities in China, the challenges of the Chinese government and the nation's contribution to the Millennium Development Goals. The event closed with some words issued by Dr. Francisco Rojas Aravena, who welcomed the participation of the Ambassador and invited China to promote academic exchange systems that favor the increase in the number of students of this nationality in Masters and Doctorate programs at the University for Peace.

After the conference the students had the opportunity to enjoy a coffee with the Ambassador and share with him their prospects, imaginary, questions and suggestions about peace. With this official event, the academic year 2016-2017 officially started and welcomed students from more than 45 countries around the world.