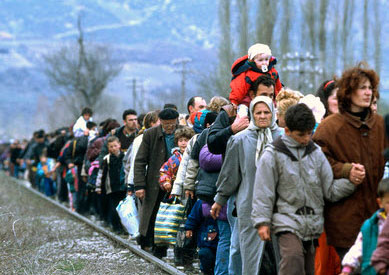 20 June, 2014. United Nation HQ, New York - On World Refugee Day, we honour the strength and resilience of the more than 50 million people around the world who have fled war, persecution and human rights abuses. This day marks an opportunity for the international community to recognize the plight of millions of uprooted families across the globe.

In 2001, the UN General Assembly established World Refugee Day as a day to renew our commitment to end war and conflict, and to help the people who have been forced to flee their homes.

Some 33.3 million people have been displaced by war and violence in their own country in recent years, and some 16.7 million have become refugees in other countries. Last year alone, over 10 million people were newly displaced and every 15 minutes, one family was forced into flight.

At the same time, many of the existing conflicts remain unresolved so fewer people are able to return home. Hundreds of thousands of people continue to live in exile, many for several years or decades. Some families have become permanent exiles for generations to come.

These staggering numbers give us an indication of the enormous cost of war. They do not, however, tell us the story of the devastating impact violence and persecution can have on each individual, on every family torn apart and forced to leave their homes. The true human cost of war is often ignored.

Half of the refugees under the care of the United Nations family are children younger than 18 years old. There is deep concern across the globe about the growing numbers of children escaping war and persecution on their own, without their parents or other adult family members.

But the consequences of war are felt not only by those uprooted by it. There is a significant impact on the communities who shelter the forcibly displaced and who are often showing a generosity that is well beyond their means. The long-term presence of large numbers of refugees is putting a significant strain on existing services and facilities, on national resources and local economies. The vast majority of the world’s refugees are

living in poor countries and this imbalance continues to grow. Some 86 per cent of the world’s refugees live in the developing world compared to 70 percent a decade ago.

As we look to promote a peaceful and prosperous world as part of our Post-2015 Development Agenda, we must work tirelessly to ensure that current refugees are allowed to return home while minimizing the violent conflicts, social inequities, and abuses of power that threaten to displace populations in the future.

THE PRESIDENT OF THE GENERAL ASSEMBLY H.E. JOHN W. ASHE