UPEACE Rectors Throughout the Years

UPEACE Rectors Throughout the Years 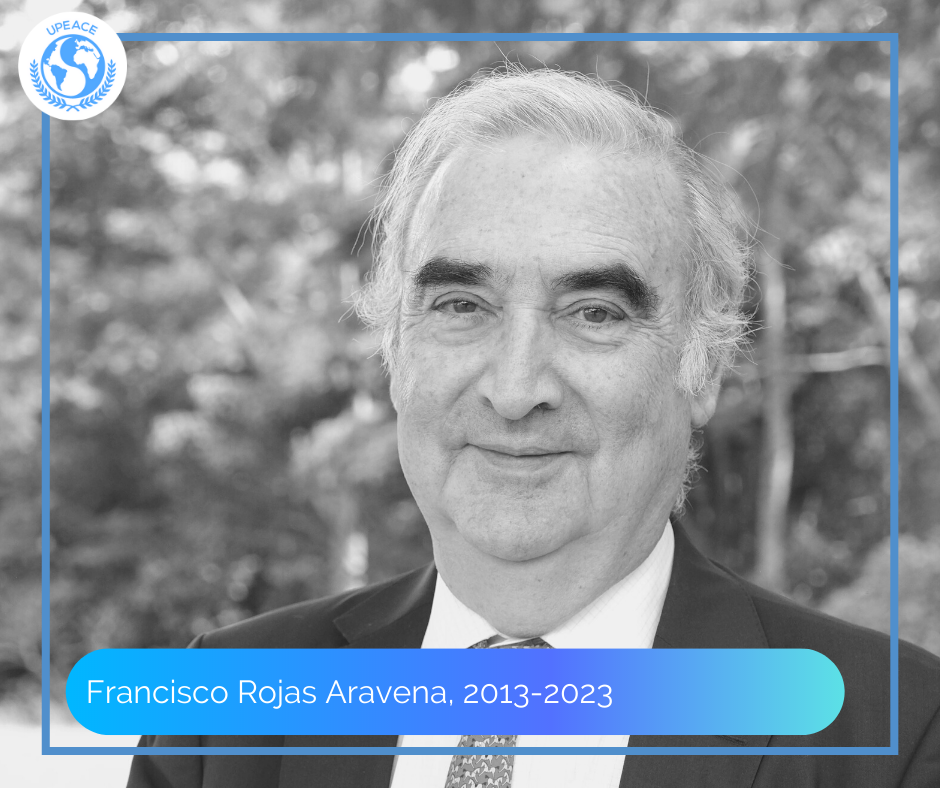 Rector of the University for Peace

Francisco Rojas Aravena was elected as the 8th Rector of the University for Peace (UPEACE) in 2013. He was elected for a second term in 2018. Dr. Rojas-Aravena has a Ph.D. in Political Science from the University of Utrecht (Netherlands) and a M.S. in Political Science from the Latin American Faculty of Social Sciences (FLACSO), and specializes in international relations, human security, integration, Latin American political systems, negotiations – theory and practice – and international security and defence. He served as the Secretary-General of FLACSO (2004-2012) and Director of FLACSO Chile (1996-2004). Dr. Rojas-Aravena also served Professor at the School of International Relations of the National University of Costa Rica (UNA) (1980-1990), Professor at Stanford University’s campus in Chile, Visiting Professor at the Andres Bello Diplomatic Academy (Chile) and a Fulbright Professor at the Latin American and Caribbean Centre (LACC) at Florida International University (USA). He is currently on the Editorial Board of several academic journals, including the Spanish edition of Foreign Affairs magazine (Mexico), Pensamiento Iberoamericano magazine (Spain) and Ciencia Política magazine (National University of Colombia). Dr. Rojas-Aravena is a prolific author and editor and has published a large number of books, as well as contributed with book chapters, both within and outside of Latin America, many of which have been translated into other languages. In 2016 Dr. Rojas-Aravena received the Malinalli Prize from the Universidad Autónoma de Juarez (Mexico), for his contributions to the Latin American region. In 2012, he was honoured by the governments of Costa Rica, Paraguay and the Dominican Republic for his contributions to the integration between Latin America and the Caribbean. Throughout his professional career, he has also conducted advisory and consulting work for various international agencies and governments in the region. 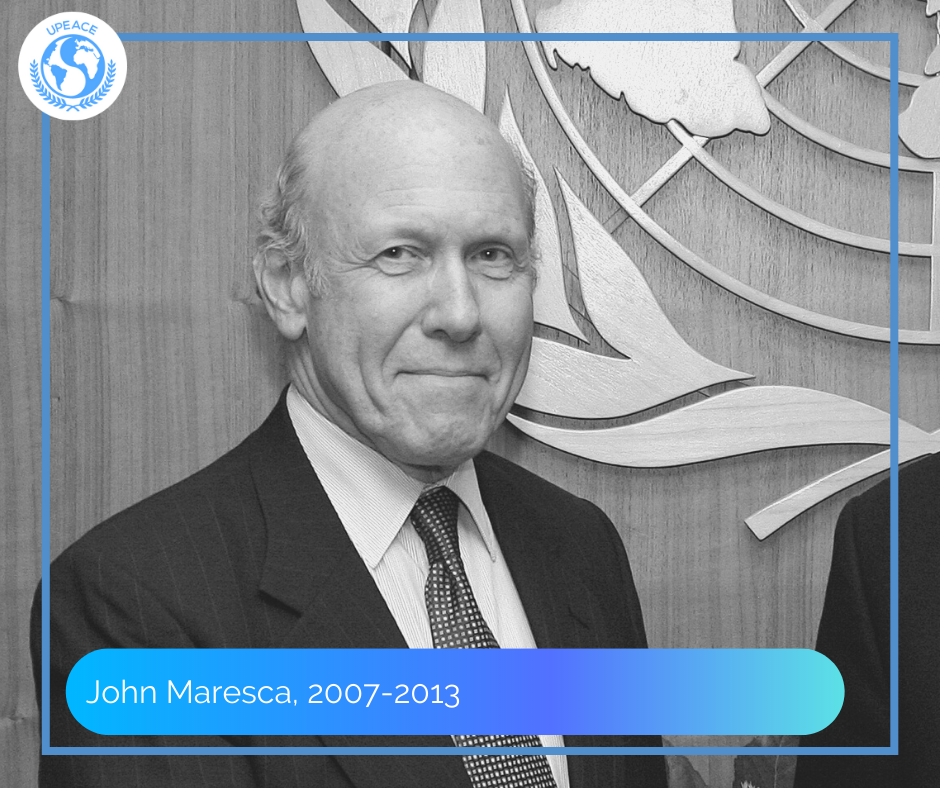 Former US Ambassador to the OSCE

John J. Maresca has held a number of posts in the US government and served as Rector of the University for Peace (UPEACE) in Costa Rica between 2007-2013. During his diplomatic career, Maresca held several key positions including United States Representative to the Organization for Security and Cooperation in Europe (OSCE) between 1989 and 1992, Special Mediator for conflicts in Nagorno-Karabakh and Cyprus, and chief American negotiator for Military Confidence and Security-Building Measures. He negotiated the Helsinki Final Act of 1975, as well as the 1990 Charter of Paris for a New Europe and the Joint Declaration of Twenty-Two States, the two documents that formally ended the Cold War and converted the OSCE to a post-Cold War role. Ambassador Maresca was sent as a Special Envoy to open U.S. relations with the newly independent states from the former Soviet Union. Prior to that, between 1986 and 1989, he held the post of Deputy Assistant Secretary of Defence. 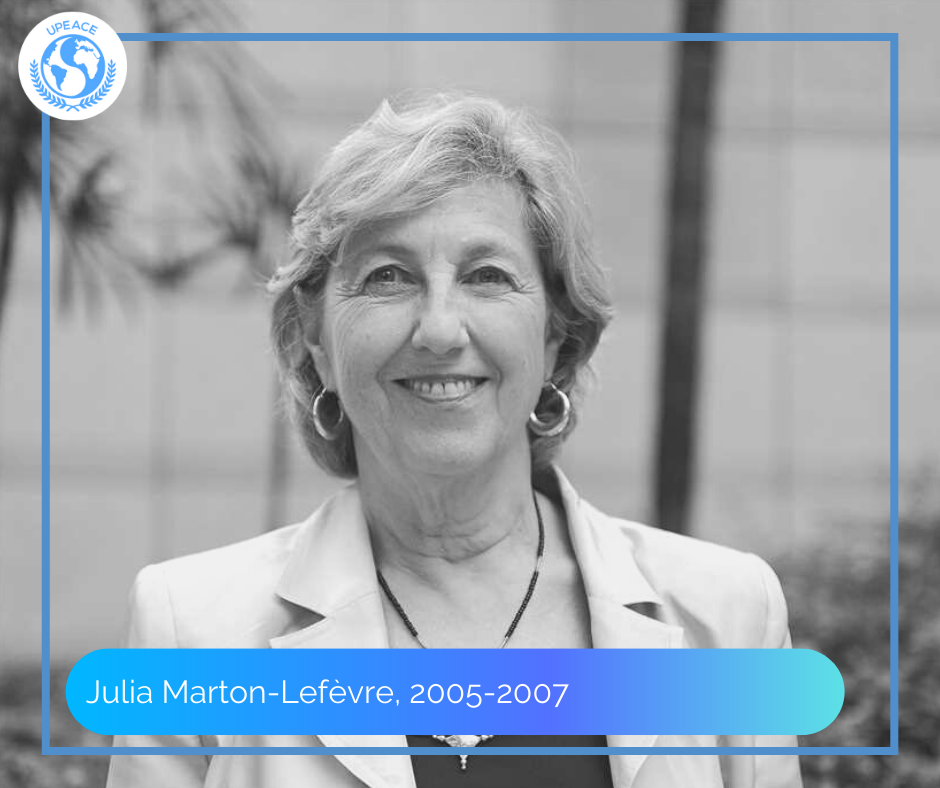 Julia Marton-Lefèvre stepped down as Director General of IUCN (International Union for Conservation of Nature) in January 2015, after eight years as head the world’s largest international conservation membership organisation.  Prior positions have included Rector of the University for Peace (UPEACE); Executive Director of LEAD (Leadership for Environment and Development) International, and Executive Director of the International Council for Science (ICSU). Julia has given hundreds of speeches throughout her career, written articles, op-ed pieces, and contributed to several books. Her board memberships today include: chairing the Executive Committee for the Tyler Prize for Environmental Achievement, the Donor Council of the Critical Ecosystems Partnership Fund, and Bioversity International. Ms. Marton-Lefèvre received the AAAS Award for International Cooperation in Science; and has been honoured as a Chevalier de la Légion d’Honneur by the government of France; as a Chevalier dans l’Ordre de Saint-Charles by HSH Prince Albert of Monaco; received the ProNatura award from the government of Hungary and the Presidential citation from the Republic of Korea. She was elected a member of the World Academy of Art and Science and the World Future Council and the Royal Geographic Society. 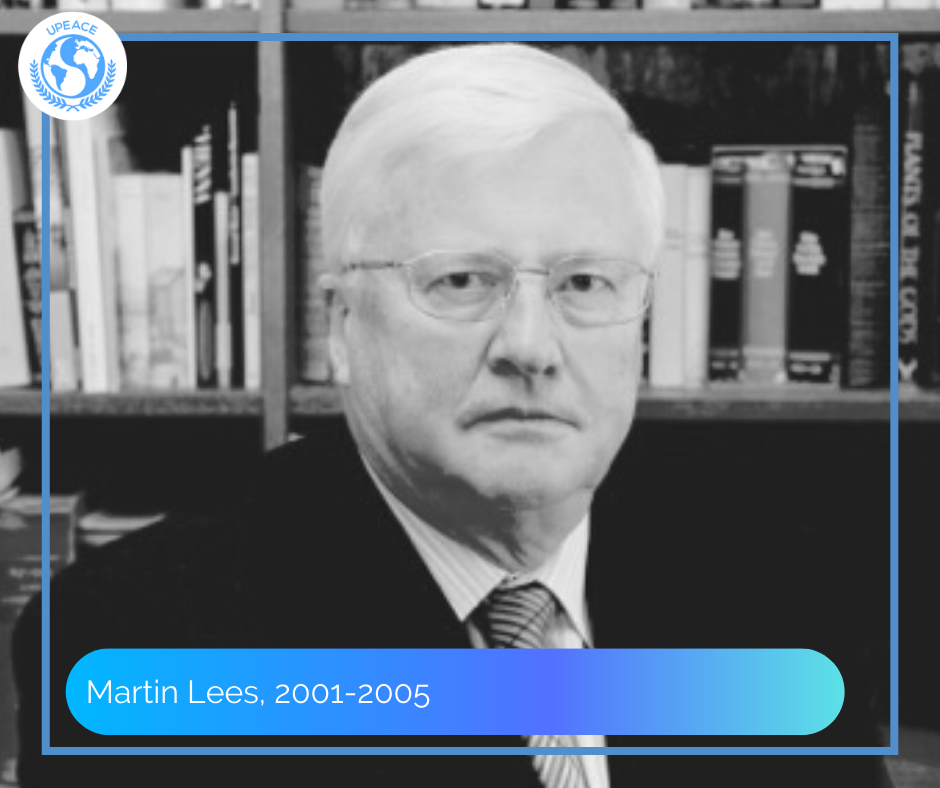 Chair of the joint OECD-IIASA Task Force on Systems Thinking, Anticipation and Resilience

Rector Emeritus of the University for Peace, Martin Lees has been Assistant Secretary General for Science and Technology for Development of the UN and Secretary General of the Club of Rome. He was responsible in 1972 for the design and launching of the OECD “InterFutures” Project on the Future of the Advanced Industrial Societies in Harmony with that of the Developing Countries. After over 35 years of cooperation with China, he was responsible for the establishment in 1992 of the China Council for International Cooperation on Environment and Development, a high-level advisory body to the leadership. As Director General of the International Committee for Economic Reform and Cooperation between 1990 and 1996, he developed and implemented programmes in the Newly Independent States of the Former Soviet Union. As Senior Adviser to the President of COP 20 in Lima and moderator of the Gorbachev Task Force on Climate Change, Martin Lees has been engaged for many years on issues of climate, environment, development and economic growth. He is now International Adviser to the University of Koblenz-Landau in Germany for a programme on the advancement of systems thinking which engages the International Institute for Applied Systems Analysis (IIASA) in Vienna. He is currently Chair of the joint OECD-IIASA Task Force on Systems Thinking, Anticipation and Resilience. 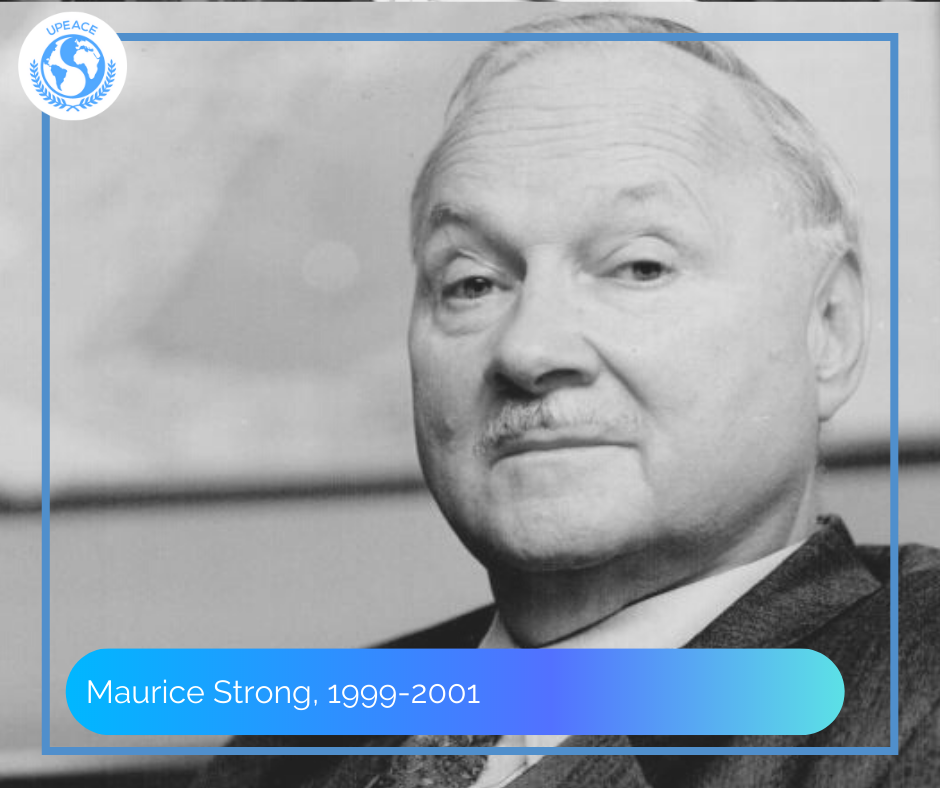 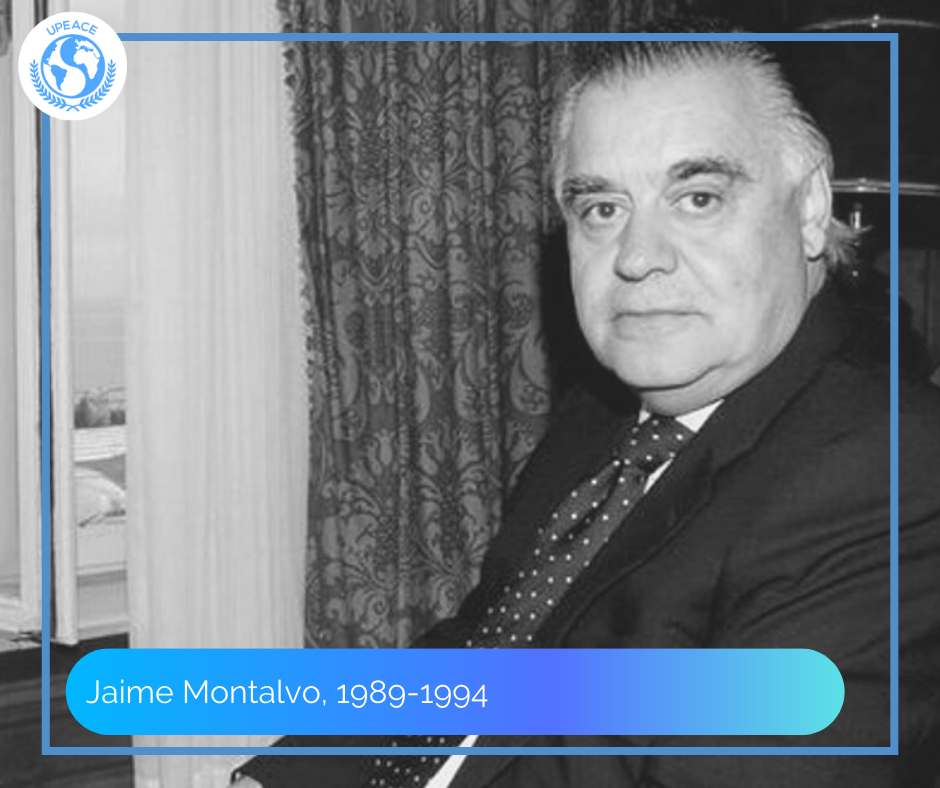 Mr. Montalvo is a Professor of Labour and Social Security Law with a Ph. D. (Doctor of Laws) from Complutense University of Madrid (awarded the Outstanding Doctorate Prize in 1969), with further studies at the Universities of Paris, Oxford, Bari and Rome. He served as General Director of Spain’s Institute of Employment and Social Security Studies (1982-1984), General Director of Spain’s National Institute of Public Administration (1984-1986), Rector of the University for Peace (1990-1992), President of Spain’s Economic and Social Council (2000-2006), and President of the Spanish Arbitration Court (2010-2012). He serves as an expert appointed by the UN, ILO, EU and other international political/scientific bodies, and is actively involved, including negotiations, in international matters (particularly Latin America). At present, he is a Trustee of Fundación Comillas (an international project whose Board of Trustees includes the Presidents of Cantabria, Secretaries of State and Senior Posts, Chairman of Banco Santander and la Caixa, etc.), Chairman of Ayuda en Acción (a development NGO with over 200,000 members in Spain and programmes in more than 28 countries), and a Trustee of Fundación Horizontes Abiertos. He is the author of many books and publications in labour matters, collective negotiation, social security, human resources, corporate social responsibility, etc. 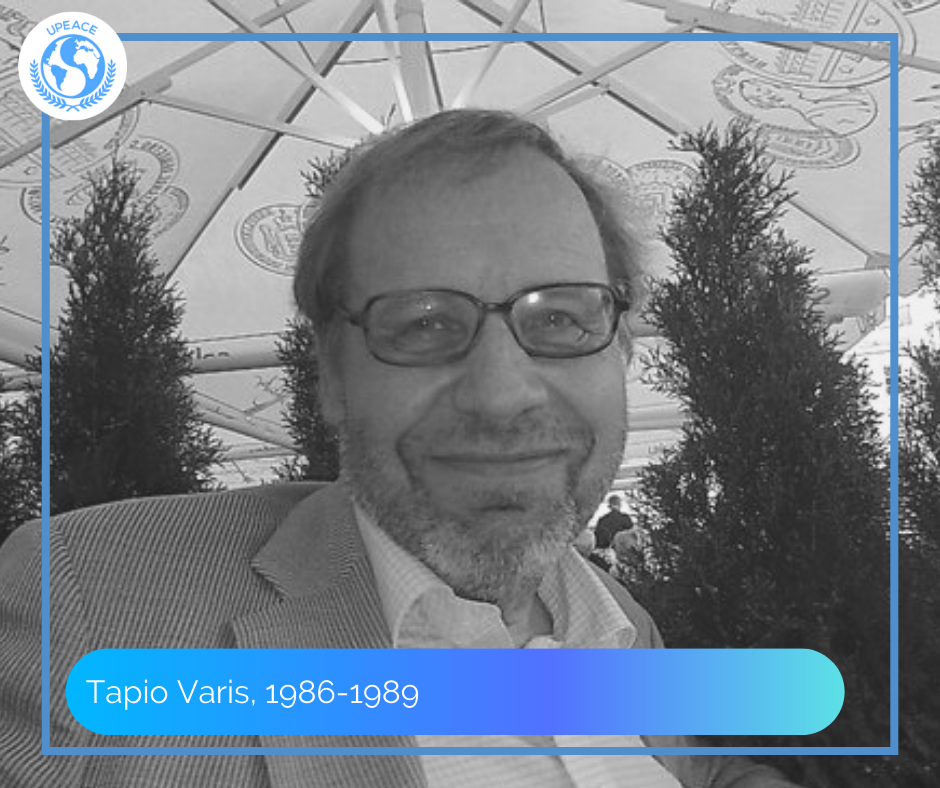 Tapio Varis is Professor Emeritus of Professional Education, with an emphasis on global learning environments, and the UNESCO Chair in Global E-Learning (University of Tampere, Finland). He is a Principal Research Associate at the UNESCO-UNEVOC International Centre for Technical and Vocational Education and Training, and a member of the Governing Board of the UNESCO IITE, as well as the European Commission Media Literacy Expert Group. He is also the acting President of the Global University System and a Media and Journalism Scholar at the University of Helsinki. He is a Board Member of the Center for Peace and Media Initiative based in New York and Member of the Board of Trustees of the Millennium Institute, Washington D.C. Prof. Varis has held various posts throughout his career: Rector of the University for Peace (established by the UN) in Costa Rica; Chair of Media Studies at the University of Tampere, Finland; and Director of Tampere Peace Research Institute. He has been visiting professor in many parts of the world, including Mexico, Venezuela, the United States, Spain, and Austria. In 2012, he was Visiting Professor at UNIVATES, Rio Grande do Sul. Prof. Varis has authored approximately 300 scientific articles on the topics related to “Global Peace through the Global University System.” His most recent work co-authored with J.-M. Perez Tornero “Media Literacy and New Humanism” (UNESCO IITE, 2011) was also published in Spanish “Alfabetizacion Mediatica y Nuevo Humanismo” in Barcelona 2012. He holds the degrees of Master and Doctor of Social Sciences from the University of Tampere, Finland. 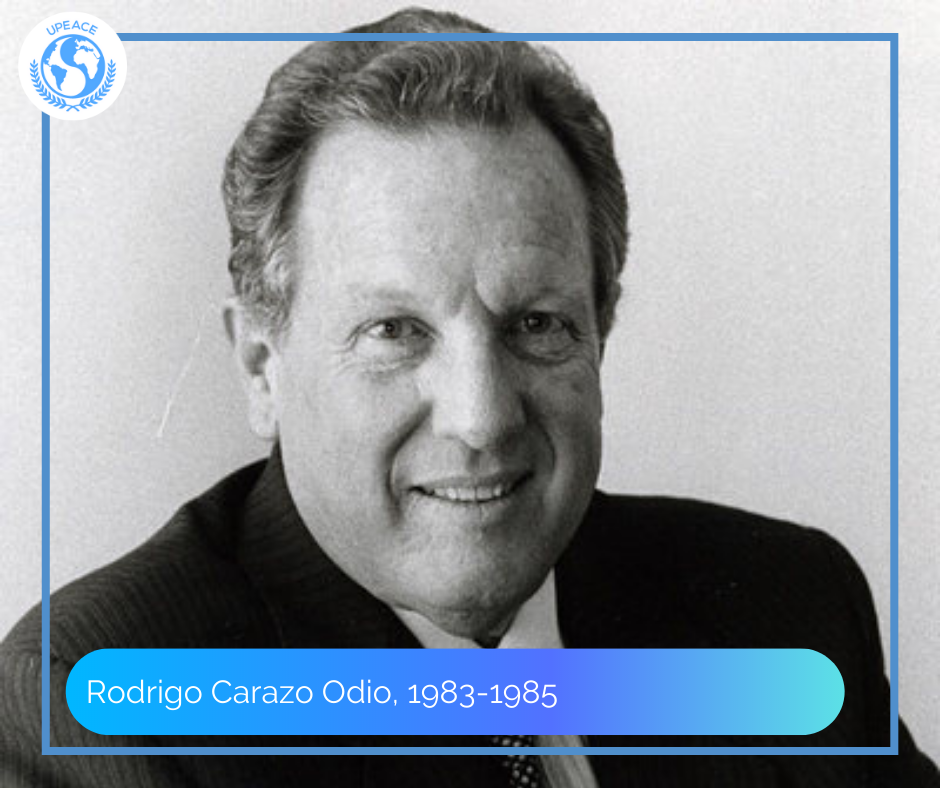 A graduate in economics from the University of Costa Rica, Carazo entered politics as a member of the National Liberation Party (Partido de Liberación Nacional; PLN) and as a follower of then president, José Figueres Ferrer. He later distanced himself from Figueres and won the presidency as the candidate of the Social Christian Unity Party (PUSC). Serving as president from 1978 to 1982, he faced both domestic and foreign crises. Inflationary problems resulting from the worldwide oil shortage of that time limited Costa Rica’s prosperity. Also, despite a commitment to neutrality in the Sandinista revolution in neighbouring Nicaragua, Costa Rica was gradually drawn into the conflict in support of the Sandinistas. As relations deteriorated between Costa Rica and Nicaragua after the Sandinista victory in 1979, Carazo’s popularity declined. During his term, Carazo helped create the University for Peace and took significant steps to preserve environmental resources. Carazo later became a private businessman, although in 1983–1984 he did briefly attempt to create a new political party, Partido Radical Democrático (Radical Democratic Party).